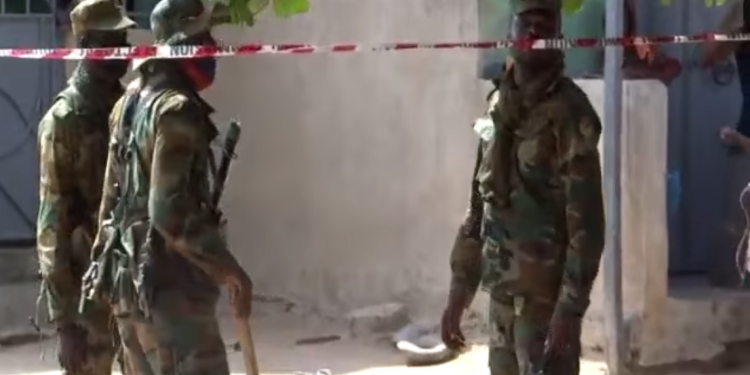 The Adontenhene of Bongase Community in the Banda District of the Bono Region, Nana Issah Yakubu has criticised the deployment of military personnel into the community.

The soldiers, according to him, are intimidating residents participating in the ongoing voter registration exercise.

Videos circulating on social media show a number of military personnel questioning registrants at a particular registration centre while preventing many from registering.

“Since the commencement of the voter registration exercise, soldiers have taken over our town. Some of them have canes with them. The soldiers are intimidating young people here,” the Adontenhene said.

Nana Yakubu also noted that these happenings are preventing some fisherfolk from participating in the on-going registration exercise in the community thus generating tension in the town.

He made the comment when the General Secretary of the National Democratic Congress, Johnson Asiedu Nketia visited the area.

He condemned what he called the “discriminatory” use of military personnel by President Akufo-Addo to disenfranchise Ewes and other non-Akans.

His remark came on the back of a report in which some military personnel were accused of preventing Ewes in Banda from taking part in the ongoing voter registration exercise.

In a post on his Facebook page, Mr Mahama described the actions of the government as dangerous.

“Executive power must not be used to foment ethnic discrimination and abuse as is happening under Nana Akufo-Addo. These calculated acts of “dehumanisation, disenfranchising Ghanaians and stripping them of their citizenship” must end. They will surely never happen under a new NDC administration because we will foster a spirit of peace and unity in our nation.”