Citi TV has unveiled the list of the top ten contestants who will take part in the maiden edition of its Keyboard Idol competition.

Over 300 entries were received by Citi TV across the country.

These entries were carefully and professionally vetted and the number whittled down to 100 entries, and later down to 30 entries.

The Keyboard Idol talent competition was premiered on August 1, 2020, where judges carefully brought down the numbers, by considering the clarity of notes played, the manner in which a piece was interpreted by contestants, and the performance.

The twenty (20) selected contestants went through auditions, through some Zoom sessions with the judges, where all of them (the 20 contestants) were asked to play their audition pieces to be judged by.

The session was informative and educative with regard to the auditions as contestants could not hide their excitement and joy with the rare opportunity to interact with judges virtually.

Most of the contestants wowed the judges with their performances over the last two weekends.

The Keyboard Idol competition is not only an entertaining and exciting show, but it is also informative and educative, as judges took time to point out the flaws of the contestants, as well as educate them on some basic rudiments of the keyboard.

After these virtual interactions with the judges and weeks of competition, the top 10 were selected to enter into the main competition, to battle for the ultimate cash prize of GHS10,000 and the bragging rights as the ultimate Keyboard Idol.

These 10 contestants, prior to the main competition, were taken through some intensive training by renowned resource persons like Dr Alfred Addaquaye, Mawuyiram Ocloo, and Kokui Selormey.

The training was done at a boot camp, which was organized to further engage the contestants in the station’s quest to profile, train, and prepare them fully for the task ahead.

The contestants could not hide their joy as they expressed gratitude for the opportunity and privilege given them.

It is worth noting that the boot camp was organized under strict adherence to the COVID-19 protocols.

The journey has been informative, competitive, educative, and above all entertaining.

After several weeks of viewers anxiously waiting for the announcement of the final 10, here is the list of the contestants who sailed through the final selection process to be part of the top 10:

Following the selection of the top 10 contestants, the Keyboard Idol live performances will begin on Saturday, 29th of August, 2020. It promises to be an exciting contest. 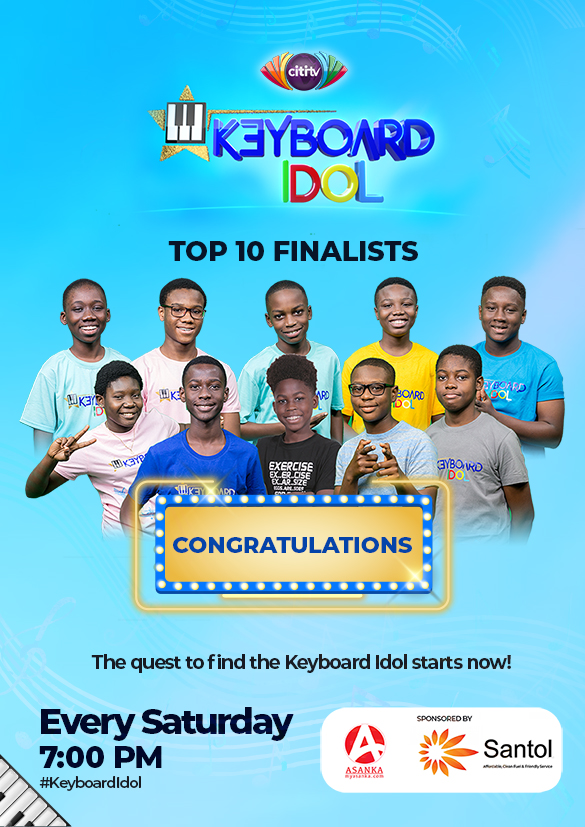 Catch all the exciting performances on Keyboard Idol every Saturday at 7 pm only on Citi TV.

The Keyboard Idol competition is a talent hunt contest for young people below 15 years.

Keyboard Idol is sponsored by Santol Energy, and Asanka, powered by TechAide.

Akufo-Addo has shown empathy to you; reward him with another term – Dr Amin Adam

Akufo-Addo has shown empathy to you; reward him with another term - Dr Amin Adam