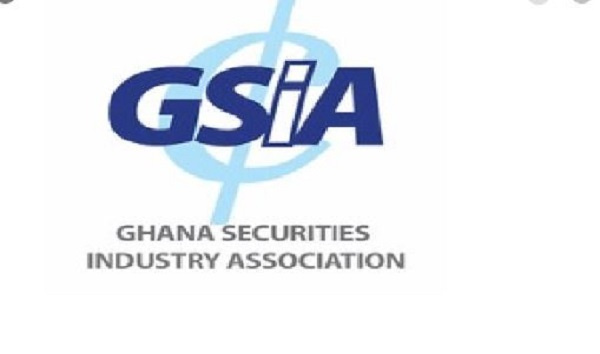 The Ghana Securities Industry Association (GSIA) says a promise by the government to settle persons whose cash has been locked up with collapsed fund management companies while customers of existing firms struggle to access their cash sends a wrong signal.

“A commitment to pay clients of firms whose licenses have been revoked while customers of operating firms are still waiting for cash pay-outs sends the wrong signals to the industry; the pay-off for having a license revoked may be more than that for keeping an investment firm in operation,” GSIA said in a statement.

GSIA made the observation days after the Securities and Exchange Commission (SEC) announced that the government will soon come up with a bailout package in the form of social interventions for customers whose cash had been locked up in collapsed fund management companies.

Although GSIA acknowledged that the assurance was timely given the severe distress persons who invested their cash through these firms have been under, there is, however, “uncertainty regarding payment of their investments as promised by Government.”

“There is adequate cause for concern, however, on the lack of traction on pay-outs to clients of firms whose licenses were not revoked. To date, less than GHS90 million out of GHS1.58 billion due these investors has been paid in cash. This represents less than 6% of the total amount due. However, we are yet to realise the fulfilment of a promise by Government to pay up to 20% more in cash, leaving 80% in bonds. A commitment to pay clients of firms whose licenses have been revoked while customers of operating firms are still waiting for cash pay-outs sends the wrong signals to the industry; the pay-off for having a license revoked may be more than that for keeping an investment firm in operation,” GSIA noted in a statement.

There are reports that monies of some existing fund management companies had been locked up in microfinance institutions and savings and loans companies whose licences were revoked.

This has made it difficult for them to honour their obligations to their clients.

The Governor of the Bank of Ghana recently said government had settled over 95% of depositors of the collapsed Savings and Loans and Microfinance institutions “so there is just about 5 percent of depositors who have not been paid.”

GSIA explained in its statement that because fund managers are generally aggregators, most of them presented ‘grouped’ claims on behalf of their clients, and not individual claims, to the Receiver of collapsed MFIs and S&Ls.

The Ghana Securities Industry Association further observed that communication from various government sources that about 96% of investors have been paid has served to cause more worry in the sector as investors demand their cash from Fund Management firms who are still waiting for these funds.

“This communication means that the proposed 20% cash pay-out from government will be seen as totally inadequate and not representative of the said 96% payout.”

GSIA thus urged the government to increase the cash pay-out to existing fund management companies in the country to enable them honour their obligations to their customers.

According to GSIA, this will reduce the current tensions among stakeholders in the industry.

“Government, through the Ministry of Finance, should urgently increase the proposed cash pay-out to fund management firms to levels that properly reflect its communication to the public, ensuring that about 96% of its clients are paid,” GSIA proposed in a statement.

It also called on the government to ensure a “revised public messaging that correctly captures the situation on the ground be released: that so far only GHS87 million out of GHS1.58 billion has currently been paid in cash to the sector. Updates to this position can then be made as any additional cash payments are made.”

Read the full statement from GSIA below: 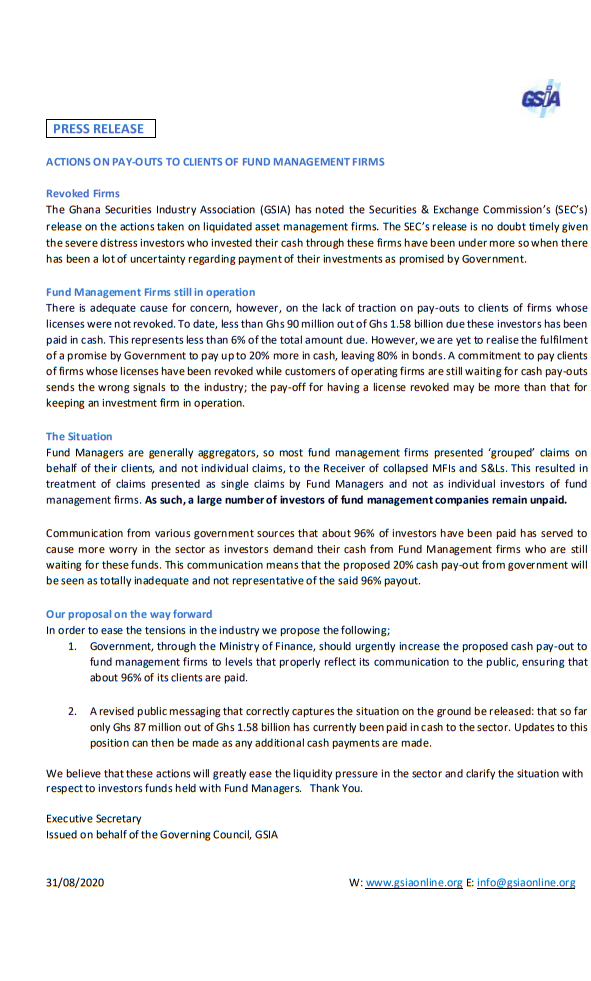 Four FMCs file suits against the revocation of licence – SEC