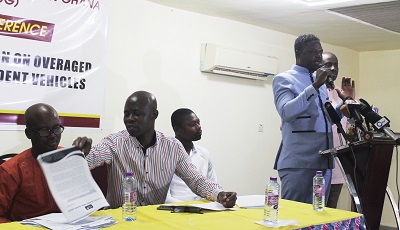 The Automobile Dealers Union of Ghana says the suspension of the Customs Amendment Act is an attempt by the Akufo-Addo government to win more votes in the 2020 general elections.

The government has suspended the implementation of the law that bans the importation of salvaged vehicles into the country.

The Customs Amendment Act 2020 among other things, provides incentives for automobile manufacturers and assemblers registered under the Ghana Automotive Manufacturers Programme and prohibits the importation of salvaged motor vehicles and cars over ten years of age into Ghana.

The General Secretary of the Automobile Dealers Union, Clifford Ansu in a Citi News interview said the group wants a total cancellation of the Act instead of the suspension.

According to him, the government suspended the implementation because of the upcoming 2020 elections.

“If this is what you want to do at the moment then it means that immediately after the elections, the law can come back because if something is good, you don’t suspend it. Suspensions are only done when someone misbehaves but if you only say this is what you can do for us now, then the decision by the government on this issue is not definite and we are not happy with the decision.”

He thus urged the government to take the law back to Parliament for it to be repealed.

“We have only expressed our opinions that there is no way we are going to accept that. The government can take the law back to Parliament for review. It’s so simple, it didn’t take them more than three weeks to pass this law so they can equally do the same.”