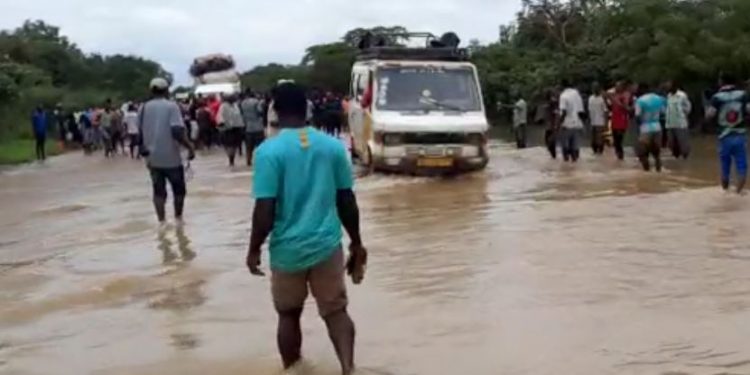 The situation has left hundreds of passengers stranded with a lot of livestock washed away.

“Traveler’s from Bolgatanga to Bawku or the other way around must take caution. The bridge at Kubore is submerged in water. The road leading to Bawku is flooded. Vehicular movement is impeded. Please do not be a victim of this hazard, prevention pays,” NADMO said in a brief statement.

The spillage of the Bagre Dam at the latter part of August together with torrential rains, resulted in flooding in most communities, particularly along the White Volta.

Hundreds of farmlands have submerged and in some instances, buildings have collapsed.

In the early hours of Monday, September 7, 2020, the water level at the White Volta bridge at Kobore in the Bawku West District had risen over its limit submerging hundreds of farmlands and washed away livestock.

The bridge was flooded to the waist level covering over 1km stretch of road.

Hundreds of passenger vehicles were grounded as stranded passengers travelling to Bawku from Bolga looked helpless. 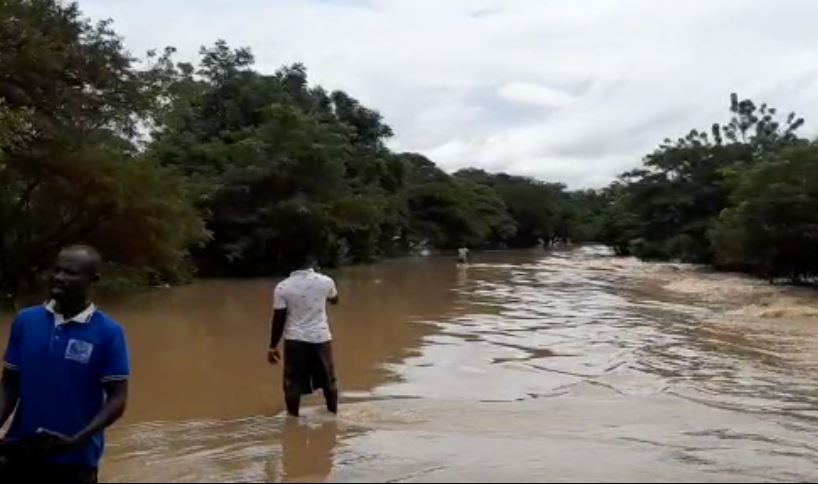 The Upper East Regional Coordinator of NADMO, Jerry Asamani warned commuters to desist from travelling on the Bolgatanga-Bawku road until the floodwaters recede.

“The current situation and the flooding that we are experiencing is a result of two factors; the spillage of the Bagre Dam and the torrential rains for the last week. We cannot quantify the farmlands but the crops that have been affected are maize, rice, groundnuts, watermelon and even vegetables.”

“NADMO officers on the ground are thinking of bringing in soldiers because the initial people who attempted crossing were disrespecting our advice but now because of the police presence they are abiding. What I will say is that people should do attempt crossing”, he advised.

In the North East Region, six persons have so far been confirmed dead due to the excessive spillage in parts of the Region.