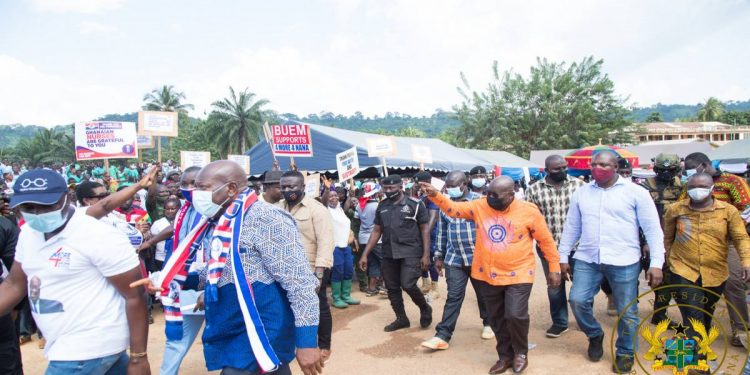 The President, Nana Addo Dankwa Akufo-Addo has promised to construct a bridge over the Oti River to enhance the economic activities of the region.

Addressing a durbar of chiefs and people of Kete-Krachi in the Krachi West Constituency of the Oti Region, the President said the bridge was currently at the design stage to determine where it would be located, adding that “No matter what happens, the construction of the bridge will happen.”

He said the Finance, and Roads and Highways ministries had reached the final stages of negotiations with Messrs FDN/INTORL, a Dutch Company, for funding and commercial agreements to build a 1.6km composite bridge over the Oti River at Dambai and Dodiokope.

“Feasibility studies have been completed for works to commence upon receipt of the requisite approvals from Cabinet and Parliament,” he said.

“Upon completion, this bridge will relieve communities in these areas of the long waiting periods and excruciating slow movement of people, goods and services by ferry across the Oti River.”

The President inspected a 15-kilometre rehabilitation of the Kete-Krachi Town roads at the cost of GH¢58 million, which is expected to be completed in 12 calendar months.

It was awarded to the First Sky Company Limited by the Regional Department of Urban Roads with scope of work covering drainage construction, earthworks, pavement works and asphalt overlay.

President Akufo-Addo said the people of the area would also benefit from a potable water plant, as would be done for other parts of the country, from the Aqua Africa Project.

He said government had not relented on its promises to upgrade the Kete-Krachi Town roads, the Midwifery and Nurses Training School, the Military Barracks, and senior high schools to GETFund projects.

“I have the Kete-Krachi and the entire Oti Region at heart. I am the one who created the region and anything that would bring development to the area is what the Akufo-Addo government will pursue.”

The President urged the electorate to vote massively for him and all parliamentary candidates in the region for more development projects.

He expressed gratitude to the Krachiwura and the people for acknowledging the good works the New Patriotic Party had done for them.

Mr Kwasi Amoako Atta, the Minister of Roads and Highways, said the construction of the bridge would cost an estimated 125 million Euros.

“For all these things that you have done for us, we say one good turn deserves another. We the people of Krachi and Oti will push you up for the good things you have done,” he said.

He commended the President and the entire Government for the sterling leadership and efforts in handling the COVID-19 pandemic, making the country to achieve a near defeat of the virus.

Nana Besemuna appealed to the President to replace the pontoon linking Kete-Krachi to Kwadjwo-Krom in the Sene District, solve the erratic electricity supply and open a technical university in the area.