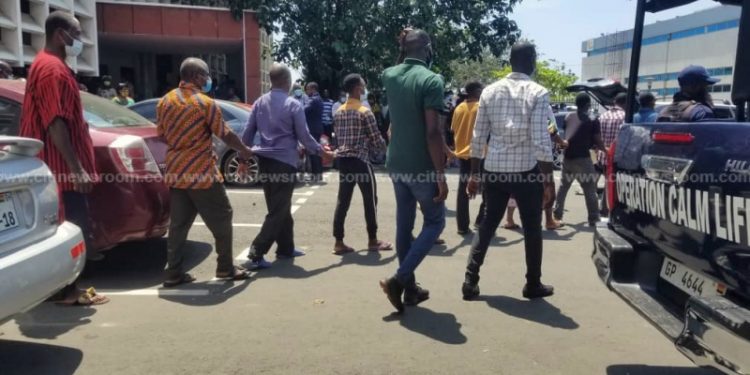 The State has re-arraigned the alleged separatists suspected of being behind last month’s violence in parts of the Volta Region only hours after they were discharged by Circuit Courts in Accra.

Prosecutor ASP Sylvester Asare told the Circuit Court that the State withdrew the charges to enable it bring all of them into one courtroom under a consolidated case.

Under an amended charge sheet, the State also told the Accra Circuit Court 2 that it had no jurisdiction to grant the suspects bail since the crimes were not committed within the authority area of the court.

Arguing for bail, however, defence lawyers prayed the court to consider the rights of the suspects, their appalling welfare conditions under remand and their readiness to avail themselves for the case whenever called upon by the State.

The defence team argued that the suspects are entitled to be presumed innocent until otherwise proven and that the circumstances under which the State is allowed to curtail the rights of citizens under Article 14 (1) of the 1992 Constitution did not include the present circumstances.

Conceding on the prosecution’s argument on jurisdiction, the defense team insisted however that the State should have taken the matter to the appropriate forum.

They argued that the court could intervene to protect the rights of the suspects by granting bail even if it did not have jurisdiction to hear the case.

The defence lawyers decried what is described as inhumane treatment the 78 re-arraigned suspects are going through in BNI custody.

Theophilus Donkor who described the suspects’ situation in open court claimed that the suspects are cramped into two little cubicles at the BNI and denied food.

“As at 1:04 pm, the accused persons here have not even drunk water. This is what they have been going through at the BNI,” he said.

He insisted that the police prevented the suspects from eating food bought for them though the prosecutor and investigators present in court denied the claim.

According to Mr. Donkor, the suspects are still in the very dresses they were in when they were arrested and wondered whether they even get the opportunity to bath.

The lawyers invited the court to consider the plight of the suspects and grant them bail.

He said, “the State is not so wicked and means to subject its citizens to such treatment” and urged the court to stop it by granting the suspects bail.

In the plea of the Defence Lawyers, the Court must send a strong signal to the State that the Court did not exist to do the bidding of the State but to dispense justice and protect the rights and liberties of the people. These suspects must be reassured that the Court is there to protect their rights,” Theophilus Donkor said.

The Circuit Court 2 however denied bail to the 78 re-arraigned alleged separatists.

The court said it was minded by the rights of the suspects, the facts of the case, and that the case had so far, not unusually dragged.

The court also charged State Prosecutor, ASP Sylvester Asare, to personally take over the welfare conditions of the suspects.

The suspects have been remanded to reappear in court on Wednesday, November 4, 2020.

Outside the courtroom were scores of sympathizers who had come to witness the case.

Relatives of the suspects, as well as curious bystanders, watched on.

Uncontrollable tears rolled down the cheeks of some people as the 78 suspects were packed back into a waiting police truck amidst heavily armed police escort.