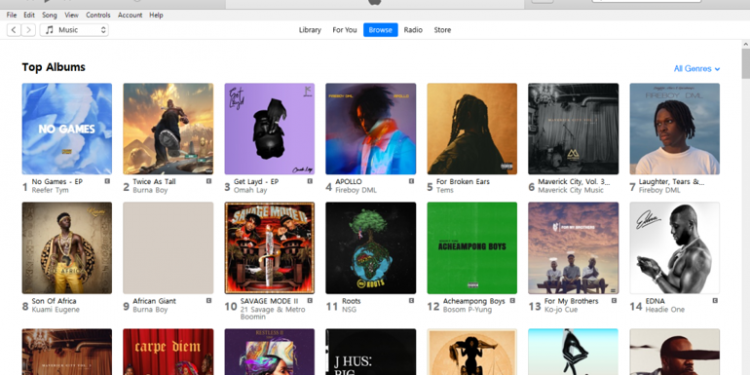 I have been meaning to write this article for a long time but I thought it wise to gather more thoughts on this because I believe it is a very provocative issue.

Barely a year ago, I had this debate with this dude on a WhatsApp group platform.

It was about the Ghana apple music chart in general − specifically the Top 100.

I was bewildered and unsure of why the most played songs in Ghana; which is updated every day, is dominated by Nigerian music.

I had this bizarre thought that: there are more Nigerians in Ghana using apple music than Ghanaians.

Was it really a bizarre thought? Maybe so, maybe not. I am yet to find out but certainly after that long period of time since that conversation in that WhatsApp group; I have come to the realization that it goes beyond just that even if I am right.

I love Ghanaian music. In fact, I am biased towards downloading any other musician’s songs who are not Ghanaian unless I am a fan of his/hers or the artist is just good; because I love good music in general.

I had this firm belief and I still do, that, Ghanaian artists are more talented than Nigerian artists in general. Even until recently, I was so convinced with myself that we make better music than them.

Yes, I don’t think so anymore. Don’t get me wrong. We have more talents than them, but they are making better music than us ̶̶ because talent alone is not enough.

Music is universal. Digitization has even made it easier for one’s music to get to places they have never been before or ever thought of. Hence, if you invest in it strategically and meaningfully, you will reap the benefits of it fruitfully.

Indeed, this is where the Nigerian artists are getting it right: the investment. I watch MTV Base channel and Trace Jama a lot.

The former is based in Nigeria and the latter is made for Ghanaian music largely, although, it is not based in Ghana here or at least the channel is not owned by a Ghanaian.

This, as a result, has exposed me to Nigerian music a lot. I had this preconceived thought that most Nigerian musicians are just not good enough; this made me listen to them with prejudice.

However, watching and listening with open-minded has changed that thought completely. They might not be lyrically good in general but they don’t take their music productions for granted.

They have a way of creating music that will be pleasing to your ears; so even when they are singing in their local dialect, you can sing along easily and the ΄vibe΄ is very contagious.

I might not be doing justice in describing how good their music is; so, I recommend you listen to them yourself if you don’t. Those who do will agree, if not entirely.

I tasked myself with an assignment one day considering this conundrum of who makes the better music between Ghanaians and Nigerians.

Personally, always changing channels to see which content I prefer the most to watch, chanced on a channel (Crystal Prime) which plays 100% Ghanaian music during the day between the hours of 2:30 pm to 3:30 pm thereabout.

Fortunately for me, MTV Base also has this playlist called ΄100% Naija΄ which airs around the same time.

It is important to note that, those songs played by the two channels are not dominated by the proclaimed artists but the ones who get the least airplay on TV and I did the follow-up on weekdays as well.

So, this was very intriguing for me to compare. I followed the choice of songs played on there almost throughout the days. Although some songs were repetitive, I felt that I have watched and listened enough to make judgments.

Trust me, the quality of music was glaringly obvious between the two. At least, there were potential in the fewer quality songs I heard from the Nigerian artists I watched and listened to. I, was, however, extremely disappointed in some artists I listened to from Ghana here.

I felt that some of these artists are doing music because they don’t know the career path to take and have this illusion that music is an easy choice and they can be successful with one hit, at least, that was what I gathered.
This is not to say there weren’t any potential from what I heard. Some were really good.

But then again, talent alone is not enough. There are very talented young artists making good music in this country and all they need is a little push or a proper system where the business-wise of music is acknowledged.

It is no surprise that Ghana is not producing so many young artists or new artists in recent years.

Many might not notice but there are few who have emerged in the music scene here in Ghana recently. Bosom P-Yung, Herman $uede, Black Sherif, and this year the breakthrough of the ΄Kumerica boys΄ and a few others I forgot to mention.

But the question really is “are these guys making it that big?” the answer is: No. Considering how we are in the Covid-19 era and there are no shows for them to be billed to perform, are their streaming platforms doing any good?

Compare this to the Nigerian music scene where just only last year till now, we have seen considerable many artists emerging from there such as Rema, Fireboy, Omah Lay, Oxlade, Buju, just to mention a few who are even dominating our apple music album chart and top songs even better than our mainstream acts. Unfathomable! But they are not there just by chance.

One thing I have learned during this pandemic which I believe is essential in almost everything we do in life is that: an average product with good marketing is likely to be successful than a good product with little or no marketing.

Wouldn’t you agree? I think this is simply the difference between us and them. They understand the value of marketing their music very well. I take Davido’s single hit ΄FEM΄ as an example.

That song in my opinion is not a song that is supposed to be a one-time hit. It will surprise you to know that, as big as Daivido is, with his over a million subscribers on YouTube, he still sponsored the video of that song; which is deservedly doing so well on YouTube with close to 10 million views just about a month of its release.

Olamide, just last year, as big as his label signee, Fireboy, album; ΄Laughter, Tears & Goosebumps΄ was a hit, I saw it almost every time on Instagram being sponsored either with the link of a new video or a song off the album by Olamide.

Fireboy`s ΄New York City΄ was being trended by these so-called influencers on Twitter here in Ghana. I saw a similar one with Adenkule Gold as well.

This is just what I see on social media, so just imagine what they are doing behind the scenes to get their music out there. I follow this PR (Public Relations) agency on Twitter/Instagram as I am a PR student myself.

The number of Nigerian artists I see them making newsworthy sometimes overwhelms me but it is understandable. But how many of how artists have PRs? Do they even value their relevance? Your guess is as good as mine.

Nonetheless, the artists can’t absorb all the blame. Nigeria for nothing at all has the largest economy in Africa.

Comparatively, there is a lot of money in that country more than there is in Ghana. So, it is not rocket science there will be a lot of investors in the country to at least invest in their artists. But is the system in Ghana helping the artists at all?

Artists, in general, earn income from their music, (streaming platforms, sales of their CDs & royalties from airplay, etc), concerts, merch, and ambassadorial deals.

Even so, the royalties are not coming. It is only in Ghana one has to belong to a certain organization to earn money off their own songs! Additionally, there are even ban on public figures including the artists themselves not to advertise and or serve as ambassadors for any acholic beverages.

As if that is not enough, artists can’t once again, serve as ambassadors or advertise for any betting company for bizarre reasons known to them.

There have been cries from some few artists about this unfair treatment to them but to no avail.

I just lost a deal worth 1000s‘ of dollars with this foreign alcohol company..I didn’t know in GH Celebrities can’t advertise for alcoholic beverages according to FDA
Like Seriously?!
Small food we go chop too u wan take 4rm our mouth
Gh celebs wake up !!FDA Lift dat ban!!

DID U KNOW THAT AS A GHANAIAN ARTIST OR CREATIVE U CANT ENDORSE AN ALCOHOLIC BRAND OF ANY SORT ? AND NOW NO BETTING BRANDS EITHER ..??? HOW DO WE FIX THIS ? WE ARE LOOSING BIG BAGS !!!

How can an artist survive in such a system? How can they shoot videos with great quality as the Nigerians do? The cost of producing a song is not even cheap to say the least and not to talk of working with international producers or artists. The artists in Ghana certainly deserve better!

What can be done? Firstly, we should produce more quality music.

Ghanaian artists should pay to work with the best producers around to get the best out of their songs. With this, it won’t be difficult for them to attract investors to invest in them.

The artists should also come together to fight the unfair treatment against them not to advertise for acholic beverages and betting companies as well. The media can’t be left out.

We are what we listen to. If our FM & TV stations take it upon themselves to play 90% of Ghanaian music, we will develop more taste for Ghanaian music. Collaborating with Nigerian artists and producers will also help.
Although in recent times there is an improvement in that regard, it can’t stop there. The most important point of all: marketing. The artists shouldn’t undervalue the importance of marketing.

It is no surprise Nigeria is doing far better than us in the music scene and dominating our media and chart on the streaming platforms. To think there was a time when VIP, Tic Tac, and others were dominating the Nigerian music scene till now that about two songs are in the top 10 of the apple music Top 100 in Ghana.

Indeed, we have retrogressed. I recently watched a video of a Ghanaian wedding where they were playing only Nigerian music to the extent that some people even thought it was a wedding in Nigeria rather than Ghana.

Music is now a lucrative business. Our artists should see it as such and sell their works out there. It can be done as well when we all support them and move beyond the petty agenda to bring differences between the artists and fanbases.