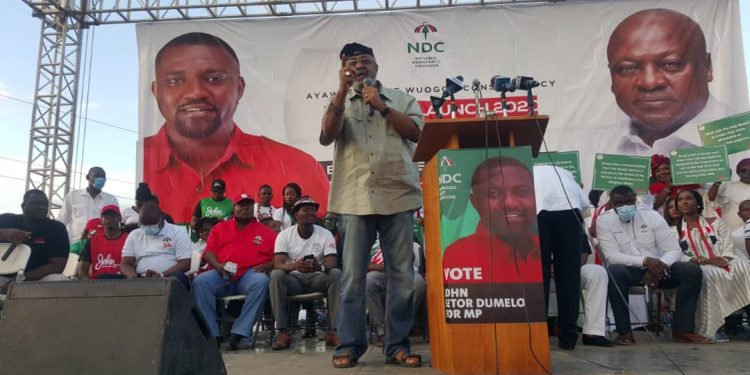 The National Vice Chairman of the National Democratic Congress NDC, Alhaji Said Sinare, is optimistic that the NDC will win most parliamentary seats in the Greater Accra Region including the Ayawaso West Wuogon Constituency.

According to him, the track record of the opposition NDC as well as its problem-solving people’s manifesto will be endorsed by the masses come December 7.

He made these remarks when he addressed teeming party enthusiasts at the Campaign launch of the NDC Parliamentary Candidate for Ayawaso West Wuogon John Dumelo.

“What I have seen here today and what Allah has shown me here today, John Dumelo will win this seat one touch. He will be the second NDC Member of Parliament for Ayawaso West Wuogon. Allah helps those who help themselves and this gentleman has helped himself and Allah will bless his victory.”

Alhaj Sinare, however, cautioned party supporters to keenly police the voting processes come December 7. He said this will mitigate the alleged ploy by the current government to rig the elections.

According to him, not less than fifty vigilant party supporters should be permanently positioned at the polling stations and coalition centres to monitor the process.

When we have this force of fifty people in every polling station, we can resist any attempt to manipulate the system,” he said

Ajumako UEW will be autonomous university in next NDC government - Mahama