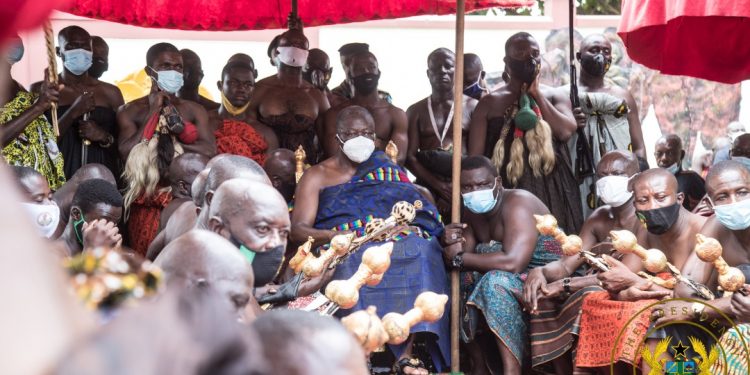 Asantehene Otumfuo Osei Tutu II has admonished political parties in the country to engage in a campaign based on issues and track record devoid of insults and violence.

He stressed on the need for all political parties to ensure the December polls is a peaceful one.

According to him, political parties in the country must take cognizance of the fact that the country is going into an election at a time other neighbouring West African nations are also conducting their elections.

He added that the peace the country is currently enjoying cannot be toyed with.

“This year’s election requires the government to campaign and let people know what they have done since they assumed office like they are currently doing and also have time to explain them well for people to appreciate what they have done.”

“It’s not a fight but a contest of ideas. So all political parties should tell Ghanaians what they have done before and what they can do should they be given power. If it happens, Ghanaians will better appreciate who to vote for during the elections.”

“We don’t want any fighting issues in the country because this is the only country we have, so I urge them all to engage in an issue-based campaign and Ghanaians will vote for the deserving candidate,” he urged.

Otumfuo Osei Tutu II  made these comments during a courtesy call on him by Vice President and the running mate of the New Patriotic Party (NPP), Dr. Mahamudu Bawumia to begin his four-day tour of the Ashanti Region today, Sunday, October 11, 2020.

The Vice President on his part said he was at the Manhyia Palace to seek blessings from the Asantehene before beginning his tour of the region.

“We only want to show to the people what we have done since we assumed the administration of the country in 2017, so they can retain us in power for another four more years and all our parliamentary candidates in the Region. It’s going to be a contest of ideas and not anything else.”

“Once we involve ourselves in partisan politics, it creates problems,” the Asantehene stressed.

Speaking at an engagement with the National House of Chiefs in Kumasi, the Asantehene urged the chiefs to be willing to work with whoever is voted into power but should not openly declare their support for one candidate as against the other.

“We had the chieftaincy institution even before there was democracy in this country. We at times forget our position and do not let people know that we are those politicians should run to for ideas. We are allowed to vote, but we shouldn’t let people know where we belong. Ghana’s laws do not even allow that because the people we rule belong to different political parties. We have to remain neutral. You have to be able to work with the government in power. This will make the chieftaincy institution receive the respect and dignity it deserves,” the Asantehene said.