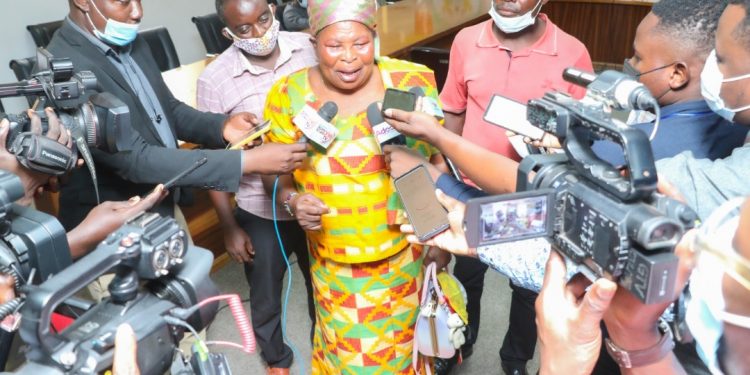 Leader and founder of the Ghana Freedom Party (GFP), Akua Donkor has been cleared by the Electoral Commission to contest in the upcoming polls.

This was announced by the Chairperson of the Electoral Commission who doubles as the Returning Officer for the 2020 presidential election, Jean Mensah on Monday, October 19, 2020.

This is the first time Akua Donkor has sailed through the nomination stage to contest in a national election in Ghana.

She came into the limelight prior to the 2012 election but could not go through the process.

In 2016, she was disqualified by the Electoral Commission after submitting her nomination forms.

When she submitted her nomination forms to contest in the 2020 polls, Akua Donkor told journalists that: “In 2012, I didn’t know about the paperwork involved in contesting the presidency but in 2016 I had learned everything about it and done due diligence. But Charlotte Osei [the EC Chairperson then] disqualified me. I later realized that John Mahama had a hand in that.”

She added that “God punished Mahama for me by making him lose his presidency because of what he did to me. That is why anytime I get the opportunity to speak I always say Mahama will never become president again.”

The GFP flagbearer has broadcaster, Adakabre Frimpong Manso, as her running mate.

Adakabre Frimpong Manso recently opened up on why he accepted to be the running mate of the Ghana Freedom Party.

He said the decision was as a result of the ‘home sense’ possessed by the party’s flagbearer, Akua Donkor.

To him, Madam Donkor’s ability to make prudent economic, political and social policies to shape national development is enough grounds why anyone would like to partner such a fine brain.

He added that, despite the ‘comedian tag’ on Akua Donkor’s personality, it is not surprising that some policies promised by the GFP leader in the past are being implemented by the governing New Patriotic Party (NPP) given the visionary qualities of his flagbearer.

In all, the Electoral Commission has cleared 12 presidential candidates to contest in the December 7 polls out of the 17 persons who submitted their nomination forms.

Five others were however disqualified.

All the three females who expressed interest in contesting the polls were all cleared by the EC.