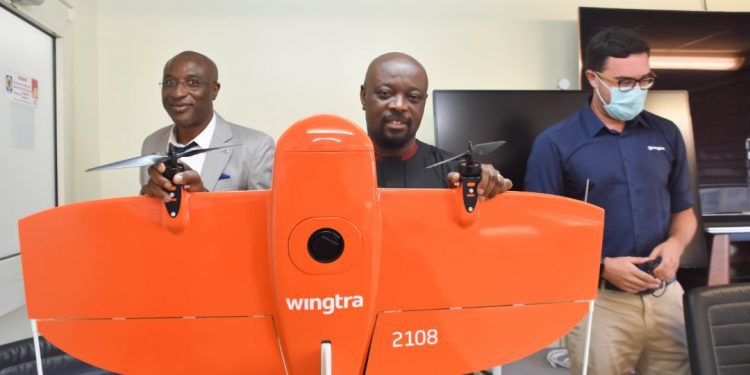 MD of ECG, Kwame Agyeman-Budu [middle] showing the Drone to the audience

The Electricity Company of Ghana Limited has launched the use of drones, the first of its kind in the operations of the company.

This was announced on Thursday, 22nd October 2020, after a successful training of engineers on how the drones operate, at the company’s training school in Tema.

The deployment of the 15 drone machines in the company’s operations has become necessary for the effective monitoring and auditing of the company’s network to curb the major challenge of vegetation interference in the network, as well as identify weak spots on the network for prompt rectification.

The Wingtra drones, supplied and serviced by Sahara Natural Resources, can last 1 hour in flight and travel as far as 8km whilst still in contact with the control tablet, which records information and videos for later reference.

Other ways the company will benefit from this initiative as outlined by the Managing Director, Mr. Kwame Agyeman-Budu, include routine technical inspections in the power network to identify defects, right of way inspections of overhead lines to identify vegetation encroachment, thermal inspections of the network to identify hot spots, verification of work done by bush clearing and tree cutting contractors, route mapping for construction of new lines, as well as trouble-shooting of faulted portions of the network to locate faults for isolation on overhead lines.

According to Mr. Kwame Agyeman-Budu, artificial intelligence including drones are rapidly becoming vital tools in the operations of transmission and distribution utilities because of their ability to provide access to difficult locations on power lines for purposes of carrying out inspections without shutting down the lines and creating outages.

He further indicated that the use of the drones would drastically reduce the risk of injury to their technical staff and lower the cost of carrying out inspections by using aerial thermal cameras, as well as reduce the timeframe of carrying out inspections in the power system; “activities which could take days could be done within minutes by the drone”.

ECG is optimistic that the inclusion of the drone system in their operations will improve efficiency, reliability of power supply to customers, and modernize their operations and position the company to become a leading utility service provider.