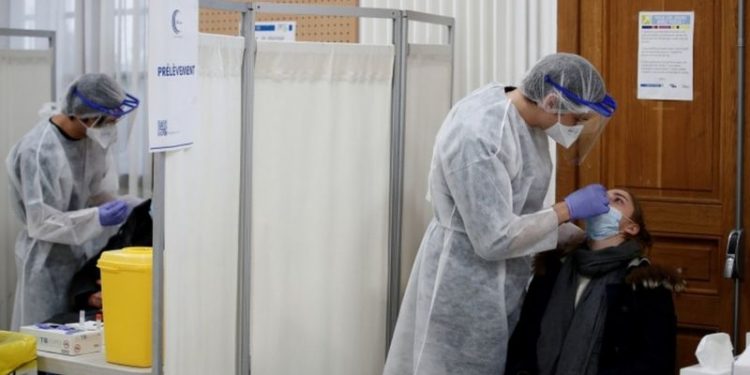 French President Emmanuel Macron has announced a night-time curfew in Paris and eight other cities to try to curb the rapid spread of coronavirus.

The measure – from 21:00 to 06:00 – will come into effect from Saturday and last for at least four weeks, Mr Macron said in a televised interview.

A public health emergency has also been declared.

Meanwhile Germany announced that bars and restaurants in higher-risk areas must close early.

Chancellor Angela Merkel announced the tightened restrictions on Wednesday as the country recorded more than 5,000 new infections for the first time since April.

On Thursday, that number rose again, with 6,638 cases recorded – the highest daily figure since the start of the pandemic.

Under the new rules, areas where infections exceed 50 per 100,000 inhabitants, bars and restaurants must close their doors by 23:00. Private gatherings will be limited to 10 people from two households.

Across Europe, governments are introducing new restrictions to battle the second wave of infections.

A partial lockdown has come into force in the Netherlands and cafes and restaurants are closing.

Earlier, Spain’s north-eastern region of Catalonia said bars and restaurants would close for 15 days from Thursday.

The Czech Republic has shut schools and bars. It has the highest rate of infection in Europe over the past two weeks, at 581.3 cases per 100,000 people.

The Irish government announced a ban on household visits from Thursday night, but childcare and visits on compassionate grounds will still be allowed.

What are the new measures in France?

The night-time curfew will apply to the capital Paris and its suburbs as well as Marseille, Lyon, Lille, Saint-Etienne, Rouen, Toulouse, Grenoble and Montpellier.

Affecting around 22 million people, it will be applied for four weeks to begin with and Mr Macron’s government will seek to extend it to six.

The measures will stop people visiting restaurants and private homes during the evening and night-time, Mr Macron explained.

Residents will need a valid reason to be outside their homes during the hours of curfew, the president said, adding that he understood that a curfew was a “hard” thing to ask people to do.

Essential trips will be permitted. Anyone found breaking the curfew will be fined €135 (£121).

Schools will remain open and people will still be able to travel between regions during the day.

Additionally, no more than six people will be allowed to gather inside private homes, but exemptions will be made for large households, Mr Macron explained.

Businesses that suffer financially due to the new measures will be eligible for state aid, he said, adding that a second nationwide lockdown would be “disproportionate”.

“The message I want to send this evening is that I need each of you, we need each other, to find solutions,” the president said. “We will get through this, together.”