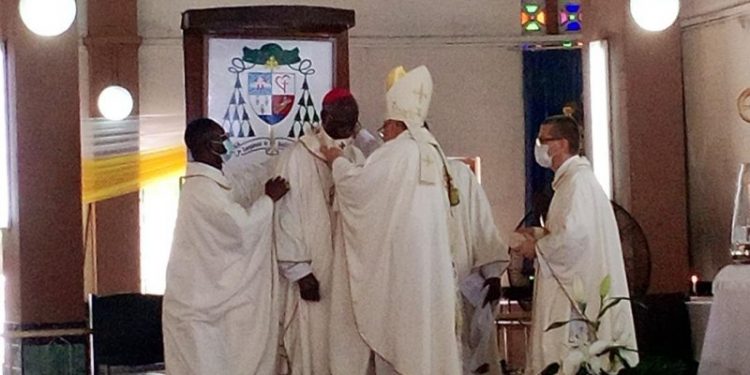 The Most Reverend Phillip Naameh, President of the Ghana Catholic Bishops’ Conference has called on Ghanaians to approach the upcoming presidential and parliamentary elections with peace.

He said elections were to deepen democracy by giving the citizenry the opportunity to choose a leader to champion development and not an avenue for fighting.

Speaking at the official welcome Mass of the Apostolic Nuncio to Ghana in Accra, Most Rev. Naameh said Ghanaians needed to speak out to both civil and religious authority with courage and point out hypocrisy, and reinstate justice and peace as the nation prepares to go to the polls.

He said peace remained a precondition for rapid socio-economic development and underscored the need for citizens to be advocate of peace ahead of the polls and shun undemocratic tendencies, including; the use of money to influence election outcomes.

Most Rev. Naameh said monies spent to influence the electorate could be channelled into developmental projects for the people.

“Such projects will impact the lives of the people better than throwing monies at voters for their votes,” he said and charged the Nuncio of the Catholic Church in Ghana to “fear not” in the delivery of his assignments.

The Most Rev. Henry M. Jagodzinski, the Apostolic Nuncio to Ghana, extended greetings from the Holy Father, Pope Francis to the congregation in Ghana.

He said he felt at home with the love and hospitality given him by the Church and the people of Ghana.

The Nuncio, decorated the Archbishop of Accra, Archbishop John Bonaventure Kwofie with a pallium; an ecclesiastical vestment made of wool with six black crosses.

This is bestowed by the Holy See on metropolitans and primates as a symbol of their conferred jurisdictional authorities.

He also donated some liturgical equipment to the church.

Archbishop Palmer-Buckle, Vice President, Catholic Bishops’ Conference, said the Nuncio, arrived in the country in September but had to subject himself to COVID-19 protocols as required by Government.

The Mass was conducted under strict observation of COVID-19 protocols.