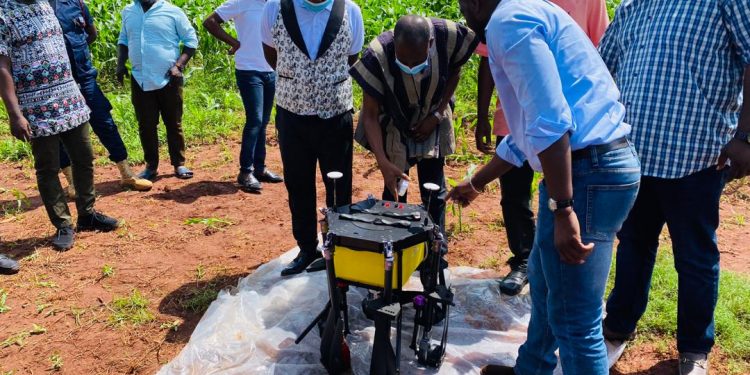 The National Service Scheme (NSS) has supplied personnel who find themselves in the agricultural sector of the economy with drones to enable them monitor and increase outputs.

The drone technology is expected to be used for the application of fertilizers, pest control mechanism, monitor crop health and growth rate, sowing, general surveillance, and many others.

The Executive Director of the NSS, Mustapha Ussif on Thursday October 1,2020 led a delegation to the Ejura farms of the scheme to have first hand information on the newly introduced drones and also monitor the output at the farms.

Speaking to the media, Mr. Mustapha indicated the Scheme’s willingness to position its farms to enable them to fully implement the modern ways of farming. The technology he believes was created to make things easier, faster, and also achieving a very high output. Therefore it has become necessary for the scheme to also adopt this method.

“Our farms have over the years been doing very well to ensure the planting and rearing for food and jobs becomes a success. We’ve also been supporting free SHS with some bags of maize through the National Food Buffer Stock Company (NAFCO). We can’t continue using traditional farming practices if we truly want to continue playing a pivotal role in the growth of the country’s Agricultural sector,” he posited.

”The era where farming was said to be that of the old and poor is no more. Farming is now advanced and very lucrative. Personnels should position themselves in and venture into Agriculture in other to be job creators and not job seekers.”

He further admonished workers to attach seriousness to their work and handle the drones carefully as it is a valuable asset to the scheme and country.

The Deputy Agriculture Minister, Dr. Sagri Bambangi also said the current leadership of the Scheme has done a wonderful job to resuscitate its farms which took a nosedive under the previous administration.

“Not only have this leadership revived the Agricultural projects, but we also initiated the use of drone technology on their farms. This I believe is commendable.”

He said his ministry through the support of the President placed priority on Agric because it plays an essential role in strengthening the economy. Programs such as the 1 village 1 Dam, 1 District 1 warehouse, planting for export, 1 district 1 factory to help process raw materials from the farms, and many more.

“These policies and programs are all a clear indication of a visionary and serious government,” he added.

The Deputy Executive Director in charge of Operations, Kwaku Ohene Djan together with the director of projects took their turns in explaining to the delegation the roles and uses of the drones on the farms and also assured them that the drones technology will be used judiciously. 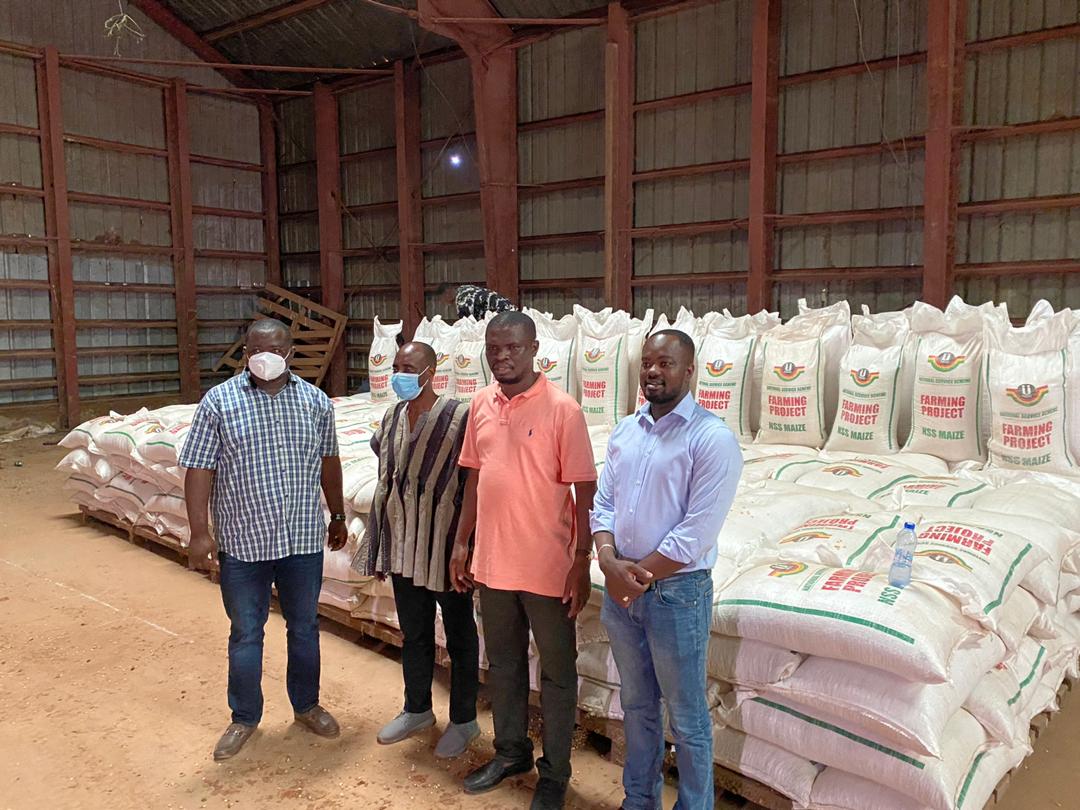 In April 2017, President Nana Akufo-Addo launched his flagship programme in agriculture called the Planting for Food and Jobs.

He expressed his renewed commitment to technology in agriculture by increasing access to improved seeds, subsidized fertilizers and machinery, finance and the introduction of mobile agriculture extension services, agriculture, the Ghana Commodity Exchange and many others.

He said, “ICT provides easier access to markets and information resources, and I have no doubt that if this is mainstreamed into our agricultural practices, productivity within the sector will be increased to ensure that not only will farmers’ input increase, but also the nation’s food security will be guaranteed.”

The Scheme is mandated to deploy Ghanaian graduates from the various tertiary institutions in and outside the country for a mandatory 12 months service to Ghana under Act 426 (1980).

The deployment is done to various sectors of the economy such as agriculture, education, health, local government, military services, and many more.

The Scheme in its contribution to the development of the country engages in other projects which include agriculture and owns farms across the country. Their Dawhenya, Brenam, Damango, Tantala, and Ejura farms are into maize production whilst Papao, Nungua, and Ohiamadwen are into animal production.

I’ve been truthful to Ghanaians – Akufo-Addo