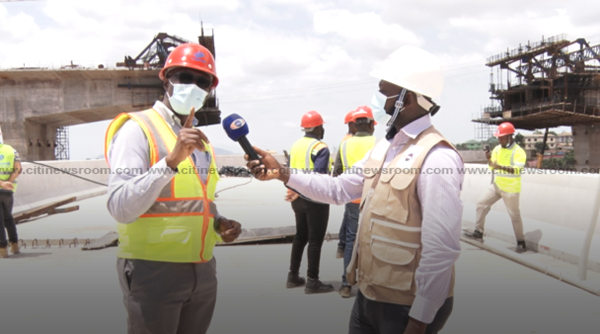 The Pokuase interchange in the Ga West Municipality of the Greater Accra Region is progressing steadily.

Contractors in charge of the project have admitted shortfalls in the completion timeline blaming it on the COVID-19 pandemic.

“The project started in 2018, and we are already 30 months into it. We had a number of challenges which COVID-19 was major. We lost a number of workers who were experienced hands. But over the past six months, we have increased the equipment and workforce and now we have reached a level that I can say we are cruising. We have done totally about 85 percent but the interchange is way behind schedule because of the reasons that I have adduced. But we have done all the local roads which will help in diverting the smaller vehicles,” Kwabena Bempong, the project’s resident engineer told Citi News‘ Nana Tuffour Boateng.

President Akufo-Addo on August 2, 2019, assured that the project will be completed in 2020 but there have been delays because most of the materials and human resource needed to execute the project delayed in arriving because of the strict lockdown in China in the early days of the Coronavirus pandemic.

On his part, Roads and Highways Minister, Kwasi Amoako-Atta during an inspection tour of the project also disclosed that a storm drain is being constructed as part of the interchange to help deal with potential issues of flooding that could affect residents around the construction site.

“They are constructing a 2 km storm drain as part of the project to ensure that we don’t experience any flooding in this area. Storm drain issues should be part and parcel of such projects so that they become one solid indivisible composite project so that by the time the construction of the bridge is done, the flooding issues are also catered for,” he said.

The government is jointly funding the project with the African Development Bank.

It is being undertaken by Zhongmei Engineering Group Limited, with Messrs Associated Consultants Limited (ACON) and the Bigen Group.