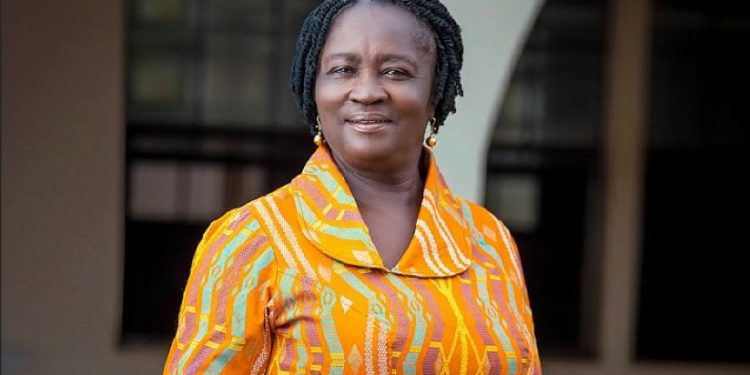 The running mate of the opposition National Democratic Congress (NDC), Professor Naana Jane Opoku-Agyemang has condemned the killing of the Member of Parliament (MP) for the Mfantseman constituency, Ekow Quansah Hayford.

The late MP was allegedly shot on the Abeadze Dominase–Abeadze Duadzi–Mankessim road by some unknown assailants on Friday, October 9, 2020.

Prof. Opoku- Agyemang in an interview with TV3 called on the state security agencies to immediately investigate the killing and bring the perpetrators to face the law.

According to her, that will serve as a deterrent to other criminals.

“I don’t think this is something anybody would want to wake up to that somebody has been murdered for whatever the reason may be. But we know that some of these things do happen in our country and it is my trust and hope that the security agencies would take the necessary measures to ensure that it doesn’t happen again and that whoever did this would be brought to book.”

“There’s been concerns about the level of insecurity in the country. I don’t think that anyone would be so secure that they will say they don’t need to take our security seriously. It is something that every government has to continuously work at because people have to feel safe. My heart goes to his family, Ghanaians and everyone. And all of us should be cautious. Safety should be everybody’s concern and the government must ensure that those who commit these crimes are brought to book so it serves as a deterrent to others.”

Killers of Mfantseman MP must be brought to book

President Akufo-Addo has already tasked the police to as soon as possible bring killers of the legislator to book.

He gave the indication in his message of commiseration to the family of the deceased.

The President said in a Facebook that: “I am shocked and saddened by the news of the murder of the Member of Parliament for Mfantseman, Hon. Ekow Kwansa Hayford, by suspected armed robbers in the early hours of this morning. It is a sad day for Mfantseman and for Mother Ghana. My last encounter with him was on 30th June, this year, when I commissioned a water supply project at Anomansa, in his constituency.”

“By all accounts, he was very much appreciated and loved by his constituents, and I expect the police to bring the perpetrators of this gruesome, cruel act to book as soon as possible. My deepest condolences to his family, to the Mfantseman constituency, to the New Patriotic Party, and to Parliament. May his soul rest in perfect peace.”

The Mankessim Divisional Command says it has begun investigations into the killing of the Member of Parliament (MP) for the Mfantseman constituency, Ekow Quansah Hayford.

According to the police, upon arrival at the scene, some vehicles had their tires deflated, and some stranded passengers

“Mankessim Divisional Police received a distress call that armed robbers numbering about 6 had blocked the road linking Abeadze Domimase and were robbing commuters to and from Dominase direction of their valuables.”

“The patrol team proceeded to the scene midway between Abandze and Mankessim and met so many passengers stranded with about 18 vehicles parked. Some of the vehicles had their tires deflated. Among the victims was the MP for Mfantseman Hon. Ekow Quansah Hayford who was shot dead and body deposited at the Saltpond government hospital mortuary for preservation and autopsy. Also shot was his driver, Issah, who is on admission at the Roman hospital.”