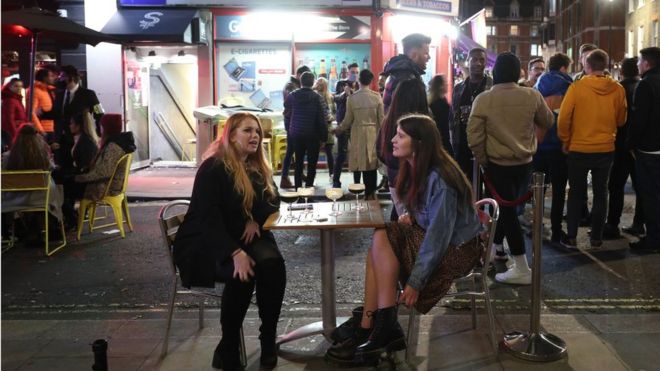 The UK has reached a “tipping point” in its coronavirus epidemic similar to that last seen in March, one of the country’s top scientists has warned.

England’s deputy chief medical officer Prof Jonathan Van-Tam said the seasons were “against us” and the country was running into a “headwind”.

More deaths would follow a rise in cases over coming weeks, he said, and urged people to limit social contact.

On Monday, Boris Johnson is expected to announce tougher restrictions.

In a statement to MPs, the prime minister is expected to set out plans for a three-tier local lockdown system which would see every region in England placed in one of three tiers, depending on the severity of cases.

Across the UK, the R number – the average number of people each infected person passes the virus onto – is now estimated between 1.2 and 1.5. Anything above 1.0 means cases are increasing.

On Saturday, 15,166 people in the UK were reported to have tested positive for coronavirus – up 1,302 on Friday’s figure, according to the government’s dashboard. There were a further 81 deaths – a decrease of six on Friday.

However, the Office for National Statistics estimates 224,000 people in homes in England had the virus, up to 1 October – roughly double the figure reported by the ONS for each of the preceding two weeks.

In his statement published on Sunday, Prof Van-Tam said that while the epidemic “re-started” again among younger people over the past few weeks, there is “clear evidence of a gradual spread into older age groups” in the worst-hit areas.

“Sadly, just as night follows day, increases in deaths will now follow on in the next few weeks,” Prof Van-Tam said.

He warned that the UK was in a different position than during the first wave because “we are now are going into the colder, darker winter months”.

“We are in the middle of a severe pandemic and the seasons are against us. Basically, we are running into a headwind,” he said.

But he also said the UK has “much improved testing capabilities” and “better treatments” available, meaning that “we know where it is and how to tackle it”.

He stressed the importance of following public health guidance and minimising contact with others, adding: “I know this is very hard, but it is an unfortunate scientific fact that the virus thrives on humans making social contact with one another.”