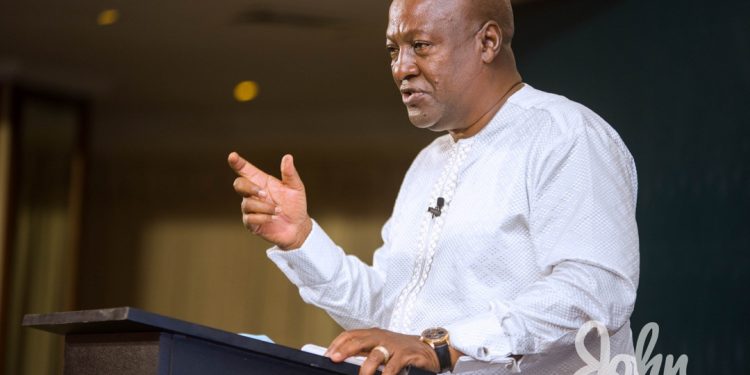 The presidential candidate of the opposition National Democratic Congress (NDC), John Dramani Mahama, has expressed concern over the increasing cases of youth unemployment.

Mr. Mahama added that this needs to be urgently resolved as it constitutes a national security threat.

The former President made these remarks at a meeting with the Osudoku Traditional Council at Osuwem in the Shai Osudoku district of the Greater Accra Region.

According to him, “youth unemployment is the most serious danger to the stability and security of Ghana.”

He expressed the NDC’s readiness to tackle the unemployment challenge, noting that the People’s Manifesto contains practical solutions for the youth and the country.

“If you take the People’s Manifesto that the NDC has come out with, it is targeted towards finding jobs for Ghanaians,” he stressed.

Among some of the measures he enumerated was the free TVET programme that he said will be introduced when the party wins the December polls.

According to the NDC leader, this will equip students with skills with which they can gain employment or employ themselves.

He also mentioned the National Apprenticeship Programme, which he said will target out of school youth who would be trained by master craft persons and artisans in various traditional vocations such as dressmaking, hairdressing, barbering or vehicle repairing.

Mr. Mahama said, upon completion, government would set the beneficiaries up by providing them with the needed tools and equipment, at no cost to them, in order for them to begin working for themselves.

The NDC presidential candidate also indicated that the planned investment of $10 billion in infrastructure will produce more jobs for the youth of the country.

On the matter of the deplorable nature of the roads in Shai Osudoku, the former President expressed dismay that the road projects his government awarded on contract have been abandoned by the Akufo-Addo government.

He however assured the chiefs and people that when the NDC returns, it would complete all abandoned projects, including the Osudoku roads.

President Mahama is on a five-day tour of the Greater Accra Region.