A 5-storey building in Shanghai ‘walks’ to a new location 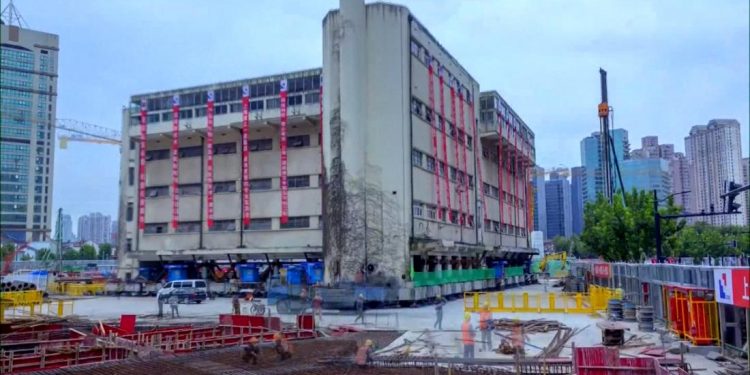 Shanghai residents passing through the city’s eastern Huangpu district earlier this month might have stumbled upon an unusual sight: a “walking” building.

An 85-year-old primary school has been lifted off the ground — in its entirety — and relocated using new technology dubbed the “walking machine.”

In the city’s latest effort to preserve historic structures, engineers attached nearly 200 mobile supports under the five-story building, according to Lan Wuji, chief technical supervisor of the project.

The supports act like robotic legs. They’re split into two groups which alternately rise up and down, imitating the human stride. Attached sensors help control how the building moves forward, said Lan, whose company Shanghai Evolution Shift developed the new technology in 2018.

“It’s like giving the building crutches so it can stand up and then walk,” he said.

A timelapse shot by the company shows the school inching laboriously along, one tiny step at a time.

According to a statement from the Huangpu district government, the Lagena Primary School was constructed in 1935 by the municipal board of Shanghai’s former French Concession. It was moved in order to make space for a new commercial and office complex, which will be completed by 2023.

Workers had to first dig around the building to install the 198 mobile supports in the spaces underneath, Lan explained. After the pillars of the building were truncated, the robotic “legs” were then extended upward, lifting the building before moving forward.

Over the course of 18 days, the building was rotated 21 degrees and moved 62 meters (203 feet) away to its new location. The relocation was completed on October 15, with the old school building set to become a center for heritage protection and cultural education.

The project marks the first time this “walking machine” method has been used in Shanghai to relocate a historical building, the government statement said.

In recent decades, China’s rapid modernization has seen many historic buildings razed to clear land for gleaming skyscrapers and office buildings. But there has been growing concern about the architectural heritage lost as a result of demolition across the country.

Some cities have launched new preservation and conservation campaigns including, on occasion, the use of advanced technologies that allow old buildings to be relocated rather than demolished.

Official indifference toward historic architecture can be traced back to the rule of Communist Party leader Mao Zedong. During the disastrous Cultural Revolution, from 1966 to 1976, innumerable historic buildings and monuments were destroyed as part of his war on the “Four Olds” (old customs, culture, habits and ideas).

Can ‘fast-forward’ China safeguard its past?

Mao’s death in 1976 saw calls for architectural conservation reemerge, with China’s government granting protected status to a number of structures before passing a heritage preservation law in the 1980s. In the years that followed, buildings, neighborhoods and even entire towns were given state support to maintain their historic appearances.

Nonetheless, relentless urbanization has continued to pose a significant threat to architectural heritage. The sale of land is also a key source of revenue for local governments, meaning that buildings with architectural value are often sold off to property developers for whom conservation is not a priority.

In the capital Beijing, for instance, more than 1,000 acres of its historic alleys and traditional courtyard homes were destroyed between 1990 and 2010, according to state-run newspaper China Daily.

In the early 2000s, cities including Nanjing and Beijing — prompted by critics protesting the loss of old neighborhoods — drew up long-term plans to preserve what was left of their historic sites, with protections introduced to safeguard buildings and restrict developers.

These conservation efforts have taken different forms. In Beijing, a near-ruined temple was transformed into a restaurant and gallery, while in Nanjing, a cinema from the 1930s was restored to resemble its original form, with some additions outfitting it for modern use. In 2019, Shanghai welcomed Tank Shanghai, an arts center built in renovated oil tanks.

“Relocation is not the first choice, but better than demolition,” said Lan, the Shanghai primary school’s project supervisor. “I’d rather not touch the historical buildings at all.”

He added that to relocate a monument, companies and developers have to go through strict regulations, such as getting approval from the government at various levels.

Building relocations he said, however, are “a viable option.” “The central government is putting more emphasis on the protection of historical buildings. I’m happy to see that progress in recent years.”

Shanghai has arguably been China’s most progressive city when it comes to heritage preservation. The survival of a number of 1930s buildings in the famous Bund district and 19th-century “shikumen” (or “stone gate”) houses in the renovated Xintiandi neighborhood have offered examples of how to give old buildings new life, despite some criticism about how the redevelopments were carried out.

The city also has a track record of relocating old buildings. In 2003, the Shanghai Concert Hall, built-in 1930, was moved over 66 metes (217 feet) to make way for an elevated highway. The Zhengguanghe Building a six-story warehouse, also from the 1930s — was then shifted 125 feet (38 meters) as part of a local redevelopment in 2013.

More recently, in 2018, the city relocated a 90-year-old building in Hongkou district, in what was then considered to be Shanghai’s most complex relocation project to date, according to state-run news agency Xinhua.