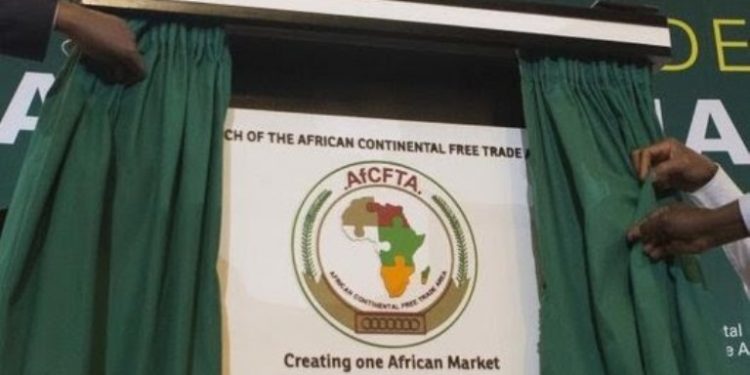 The Africa Continental Free Trade Area (AfCFTA) Secretariat has launched a new initiative known as the AfCFTA Vision which is purposed to bring together financial institutions to share knowledge on how to implement the trade agreement in 2021.

The initiative, which is in partnership with the Sankoree Institute, an affiliate of AfroChampions, comes barely two weeks left to the Extraordinary Summit of African Union Heads of State on 5th December 2020, ahead of the expected start of trading under AfCFTA in Ghana.

According to a statement released by the AfCFTA Secretariat, the AfCFTA Vision initiative is aimed at “creating a platform for knowledge creation and sharing to help accelerate the pace of implementation of AfCFTA”.

“The initiative also creates room for entrepreneurial contests to find investable solutions that can propel AfCFTA to success with the backing of the continent’s development finance institutions,” the statement added.

In order to allow for more digitized means of rolling out the Vision initiative, the Secretariat has also introduced a suite of apps collectively known as the Super-App.

The Super-App “shall serve as the base for a continental business registry, trade directory, cross-border trade facilitation network, and a dashboard for the private sector to interact with the upcoming Africa Trade Observatory”.

The App also offers a free trusted identity, known as the AfCFTA Number, to every AfCFTA actor, as well as a range of complementary tools to discover opportunities made available to all economic actors throughout the continent in the wake of AfCFTA, according to the statement.

The AfCFTA Secretariat is a creation of the AfCFTA Agreement tasked with the responsibility of coordinating the successful implementation of the Agreement.

The Secretariat operates as an autonomous organ of the African Union charged with implementing the decisions of the higher organs of the body in respect of the wide array of areas covered by the Agreement, ranging from industrialisation to lntellectual Property, and from trade in professional services to harmonisation of standards for manufactured goods.

An affiliate of the AfroChampions Initiative and other leading pan-African institutions, the Sankoree Institute brings together many of Africa’s most passionate and eminent leaders, thinkers and doers to reimagine all the best paths to a strong, globally influential, integrated, and prosperous Africa.

Sankoree leads the charge in experimentation, exploration, prototyping and execution of the best ideas resulting from robust, rigorous, and action-oriented dialogue, analysis and design-thinking.