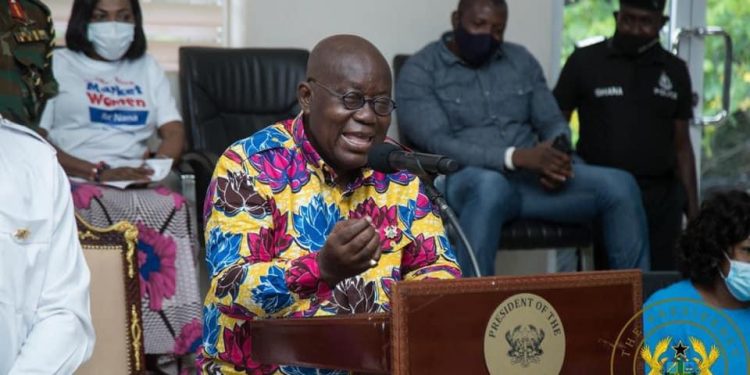 The project which is now called the Osei Tutu II Housing Estates was started by John Agyekum Kufuor’s administration but stalled in 2009.

The Ministry of Works and Housing in 2015 reached an agreement with the SSNIT to take over the completion of the project.

In 2017, the new Board of Trustees of SSNIT, under the Chairmanship of Dr. Kwame Addo Kufuor, took steps to fast-track the completion of the then abandoned project, in line with the President’s commitment to providing affordable housing for Ghanaians.

The Board subsequently approved a total amount of GH¢256,972,988.04 for SSNIT to complete the project within two years.

The Asokore Mampong project has 91 blocks with a total of 1,053 units comprising 336 one-bedroom, 691 two-bedroom, 26 shops, and other ancillary facilities.

All the blocks within the facility have been named using Adinkra symbols to reflect the unique culture and traditions of the Asante Kingdom.

The gated community has a well laid out tarred roads, well-lit streets at night and paved walkways, and communal car parks.

It also has a centralized water reservoir, a centralized biogas sewage treatment system, and a community police station. Seven fire hydrants have been installed for use in case of fire at the facility.

There is also a facility manager who will be responsible to ensure the area is properly maintained. President Akufo-Addo who inaugurated the project as part of his tour of the Ashanti Region said it will go a long way to address Ghana’s housing deficit.

The President commended the management and Board of SSNIT for fast-tracking processes to complete the abandoned project.

“SSNIT has done an excellent job of completing this structure and bring onto the market truly affordable houses. Houses, whereby a two-bedroom unit is GHS186, 500, a one-bedroom special, is GHS142,500 and the one-bedroom standard is GHS98,500. So as you can see, these are very reasonable prices, and they are genuinely affordable housing”, he said.

The Director-General (DG) of the Social Security and National Insurance Trust, Dr. John Ofori-Tenkorang speaking at the ceremony said his outfit worked with the Government to deliver the project not only as part of the solution to the nation’s housing challenges but also as an investment asset for the scheme.

He indicated that “As you know, we are s pension fund created by statute and our job, among others, is to invest funds of contributors to generate adequate returns so that we can continue to pay benefits to retired workers and their dependents. And the Osei Tutu II Housing Estate is one more such investment to help us meet our obligations and ensure the sustainability of the scheme”.

Dr. Ofori-Tenkorang also used the occasion to commend President Akufo-Addo for his support and interest in promoting and enhancing pensions for all workers in Ghana.

He described as laudable the President’s commitment to retiring Government indebtedness to the scheme including periods predating his administration.