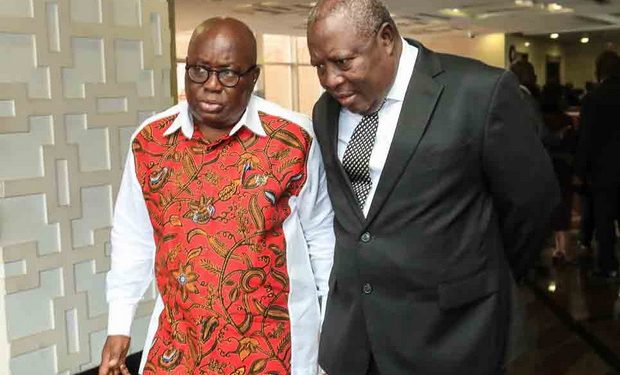 The President, Nana Akufo-Addo has denied allegations of interference levelled against him by the former Special Prosecutor, Martin Amidu.

In a nine-page response to Martin Amidu, a day after his resignation, the President described as “errors of fact” claims by the former independent prosecutor that he [Akufo-Addo] was hindering his work.

“It must be made clear that throughout your tenure as Special Prosecutor, neither the President nor any member of his government has interfered or sought to interfere with your work,” the President’s statement said.

Among other things, he cited interference by the government in his work although he is supposed to be independent.

He also cited the death of former President Jerry John Rawlings who to him, was a source of protection from the threats on his life after conducting a corruption risk assessment on the controversial Agyapa Mineral Royalties deal.

But President Akufo-Addo in addressing the matter said Martin Amidu cannot base his claim of interference in his work on a meeting the two of them had.

The president said he had no hand in Mr. Amidu’s work and found it “baffling.”

“Your accusation of interference with your functions simply on account of the meeting the President held with you is perplexing. In exercise of what you considered to be your powers under Act 959, you had voluntarily proceeded to produce the Agyapa Report. The President had no hand in your work,” President Akufo-Addo indicated in his response.

“It is baffling that you would present a summary report of work, not commissioned by the President or a member of the Executive, to him and expect him not to act on the report, particularly in light of the clear expression by your good self that the report was supposed to guide future executive actions,” he added.

Martin Amidu had stated in his resignation letter that he refused to shelve the controversial Agyapa report to enable the president “handle the matter,” and also refused to take a copy of the alleged comments from the Minister of Finance offered him by the president since that, to him, would compromise his independence.

But President Akufo-Addo contended that Martin Amidu’s decision not to accept the response of the Finance Minister goes against the standards of fairness, reasonableness and candour.

“The President request you to give the public officials in question an opportunity to comment on your findings and conclusions… A request to comply with the rules of natural justice and fair hearing surely cannot be cited as a basis for alleging interference consequent upon which you would resign.”

The President indicated that although there were a number of instances such as going public with what transpired between himself and Martin Amidu as well as the conferment of immunity from investigation and prosecution on John Mahama by the ex-Special Prosecutor which could have warranted an intervention from him, he decided to ignore them to guarantee the independence of the Office of the Special Prosecutor.

He concluded that nothing he or any official of his did “could be remotely construed as interfering” with Martin Amidu’s mandate as Special Prosecutor.