Exactly a week from today, Ghanaians will go to the polls to elect a president and 275 members of parliament representing constituencies across the country. This electoral process is unique in the sense that it’s happening at a time when the entire world is battling the novel coronavirus pandemic. In this article, I explore some of the key issues that are top of mind for voters going into elections, present some key historical voting trends, including which constituencies you should be looking at on the night of the election and the days after, and present a summary of the polling data so far.

As this is also the first time in our democratic history that we have a former president trying to unseat a current president, we have the luxury of comparing their performances (Praise the Lord!)

Corruption: a key issue in this election?

From a performance measurement perspective, one of the key metrics for examining the performance of countries in curbing corruption is the Corruption Perception Index (CPI), published by Transparency International. For context, the CPI ranges from 0 to 100, and higher numbers are better. Figure 1 shows Ghana’s Corruption Perception Index from 2013 to 2019. On the basis of the CPI, there appear to be higher levels of perceived corruption under the current President, His Excellency Nana Akufo-Addo, than the former president, John Mahama. In fact, the current president received some of his lowest scores in recent polls in the area of addressing corruption. 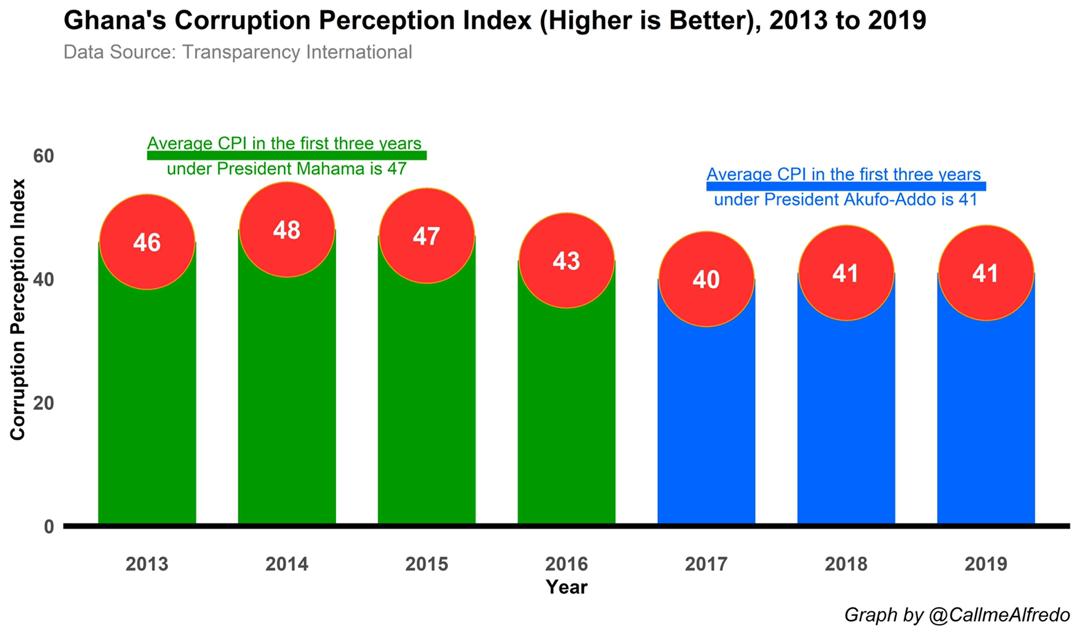 A reasonable question to ask is, to what extent would the current president’s performance in addressing corruption impact his chances of winning re-election? One way to address such a question is to consider the key issues voters are thinking about going into the December 7 elections. Figures 2 and 3 present key issues of concern from the National Commission for Civic Education (NCCE) survey of Ghanaian voters in September and the recently released University of Ghana Political Science Department survey. From those data points, the issue of corruption does not appear as a top of mind issue for voters. Only 4% of respondents in the UG Poli Science survey identified corruption as a key issue. In the NCCE survey, corruption was ranked as a number 10 issue of concern to the Ghanaian voter. In addition to those lines of evidence, a recently published survey of first-time voters (defined as those between 18 and 21 years) found corruption as one of the least ranked issues, with education, job opportunities, healthcare, and infrastructure topping the list of issues for these young voters. The multiple lines of evidence are therefore pointing to a very worrying conclusion: some voters might not be thinking about corruption enough. That is worrying, considering how much Ghana loses to corruption each year. 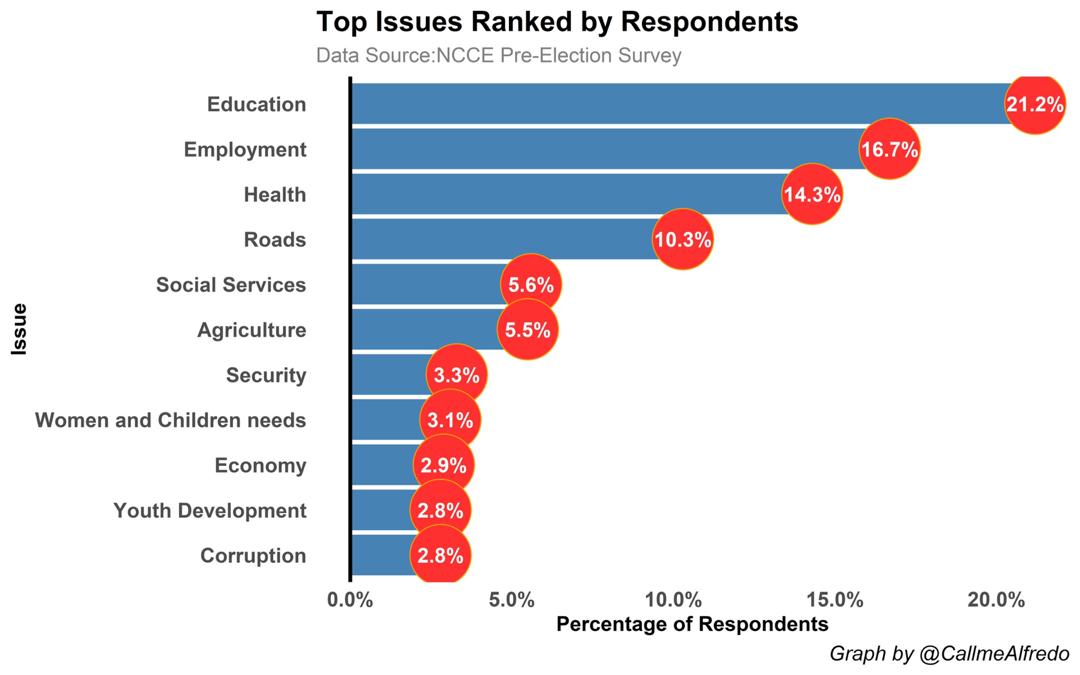 COVID-19: Where are we as we head towards December 7?

I must begin by commending the Government of Ghana led by H.E Nana Akufo-Addo for some of the efforts at addressing COVID-19. I must also commend the staff and management of the Ghana Health Service and the research laboratories that have worked very hard to support the efforts of containing the spread of COVID-19. At earlier stages of the pandemic, Ghana had one of the best levels of testing on the continent. For example, around June/July, we were reporting approximately 3,000 new tests/day (See Figure 4).

The level of testing deteriorated over time and as with COVID-19 if you don’t test you don’t detect cases. There has been a struggle between balancing political activities and managing the pandemic (e.g. holding a voter registration exercise despite rising cases, relaxing restrictions even when the effective reproduction number was over 1). Currently, we are reporting just over 1,100 new local tests a day. Local, meaning tests not reported from the Kotoka International Airport. 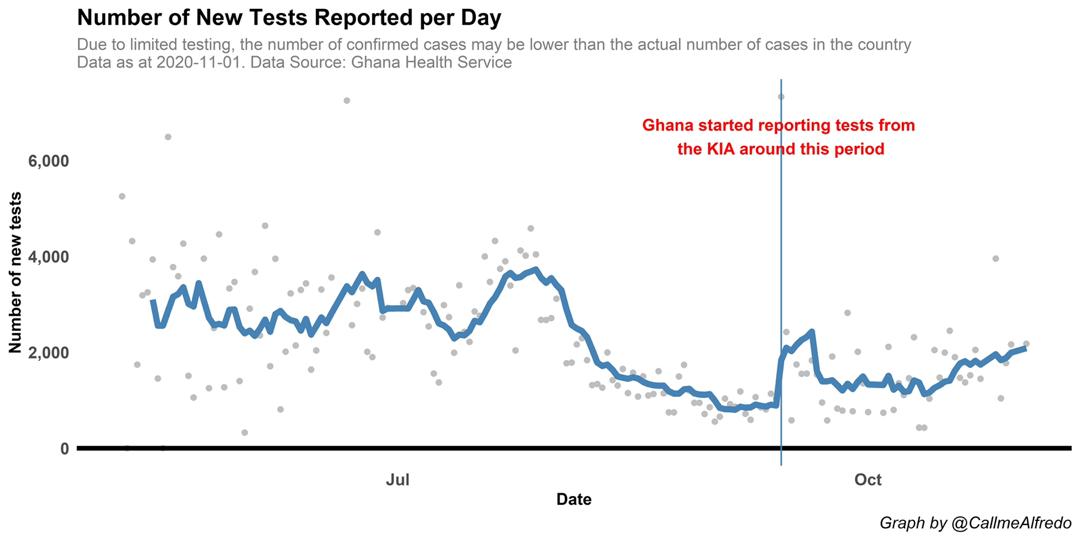 Voters appear to rank the government higher in management of the pandemic (e.g. 87% rated it as good in the UG Poli Science department survey, higher grades in the CDD survey, 77% in a soon to be released iRIS Research Consortium report). Again, one would ask, is COVID-19 management a top issue in the elections? Well, in the UG survey, about a quarter of respondents felt it would influence their voting choice. I think it is a definitely an important issue. We often talk about this dichotomy of the economy versus the pandemic. I find that interesting because if we are losing people (whether sick or dead), there will be impacts on the economy as well (lost productive hours, labour market impacts, etc). The level of interconnectedness between good pandemic management and economic recovery is not talked about enough.

When looking at the historical voter shares for both major political parties, what I find interesting is that from Election 2000 onwards, both parties have obtained at least 44% in the first round of the elections. That suggests that even when voters are disappointed in both parties, they are each assured of a somehow core base of 44% of the votes. This paper attributes that core support to history/ideology and ethnicity/regionality. 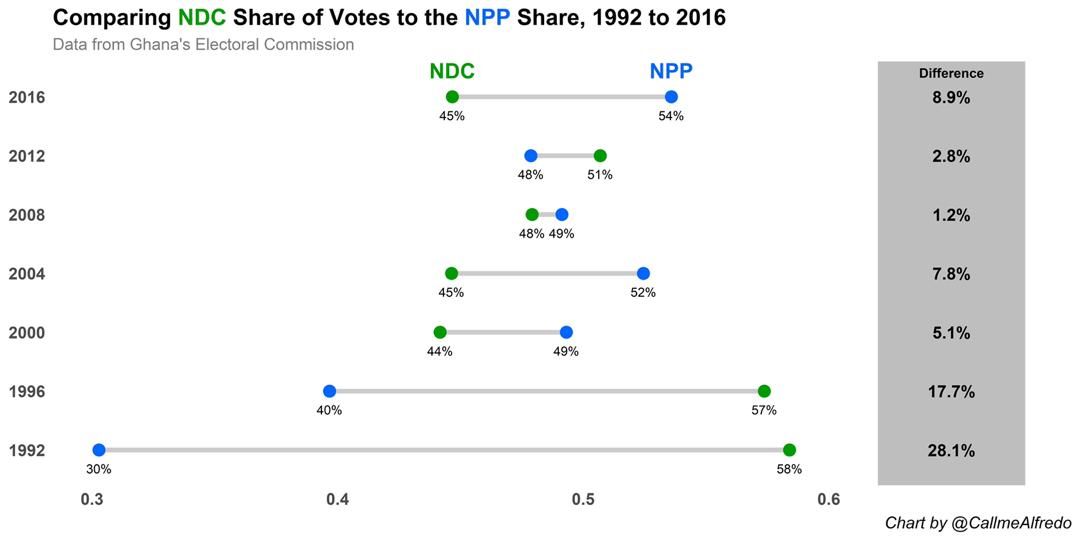 Ghana elections: the most swinging of the swing constituencies

Okay, here we go! At a regional level, the Greater Accra, Central and Western Regions could be seen as the swing regions. If they don’t like you, you are out. I wanted to zoom into those regions to look at the trends in the constituencies. It turns out that in Ghanaian elections from 1996 to 2016, there are nine constituencies that have always correctly voted for the winner of the presidential elections. Three of the constituencies (Ablekuma Central, Klottey Korle, and Krowor) are in the Greater Accra region, four (Agona East, Awutu Senya West, Efutu and Gomoa) are in the Central Region, and two (Jomoro and Shama) are in the Western region (see charts 7 to 9 below). Note that Ledzokuku is added to the Greater Accra chart because it was almost perfect, except in 2016 and the vote margin was about 0.5 points.

From an election watch party standpoint, on the night of December 7 and a few days after, when I have my bowl of fufu and my non-alcoholic beer (yeah, that’s a thing), I will be paying very close attention to results coming in from those nine constituencies. 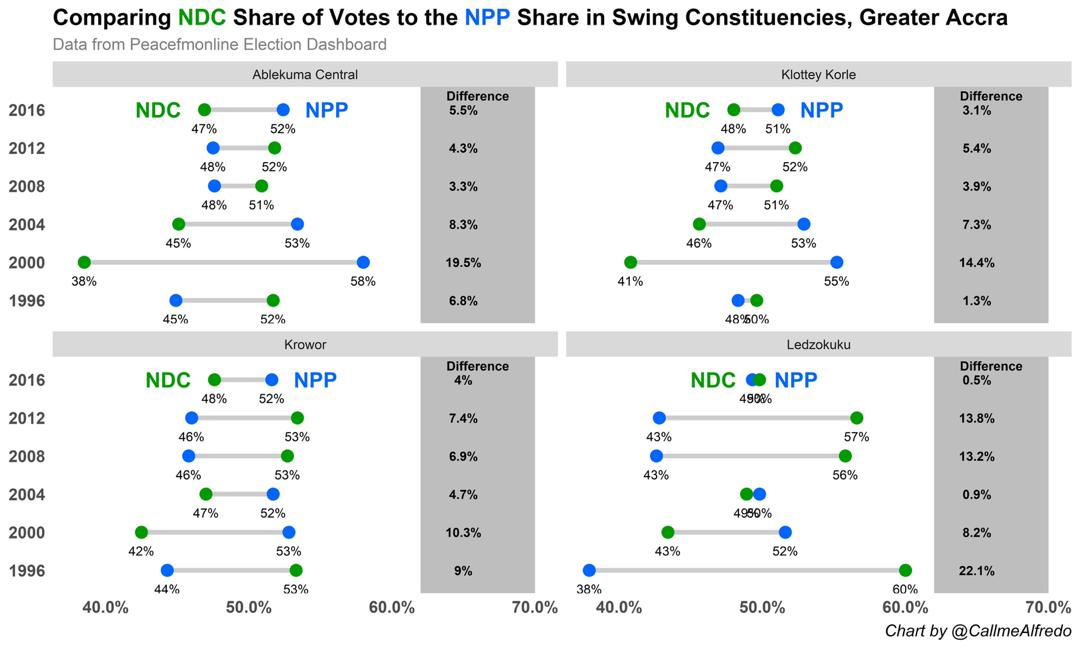 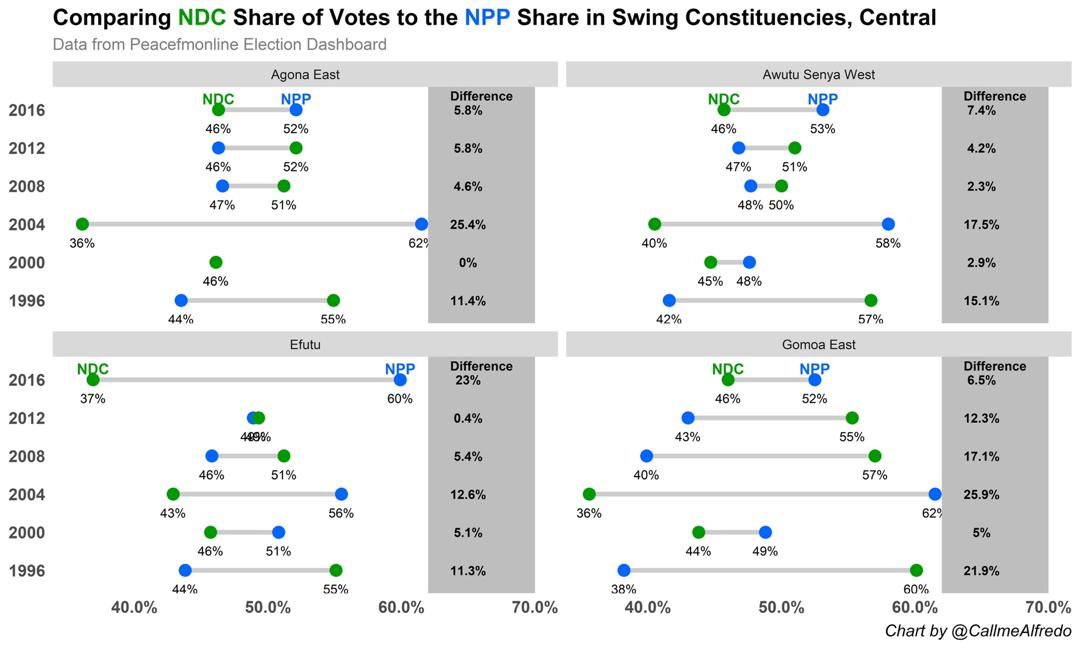 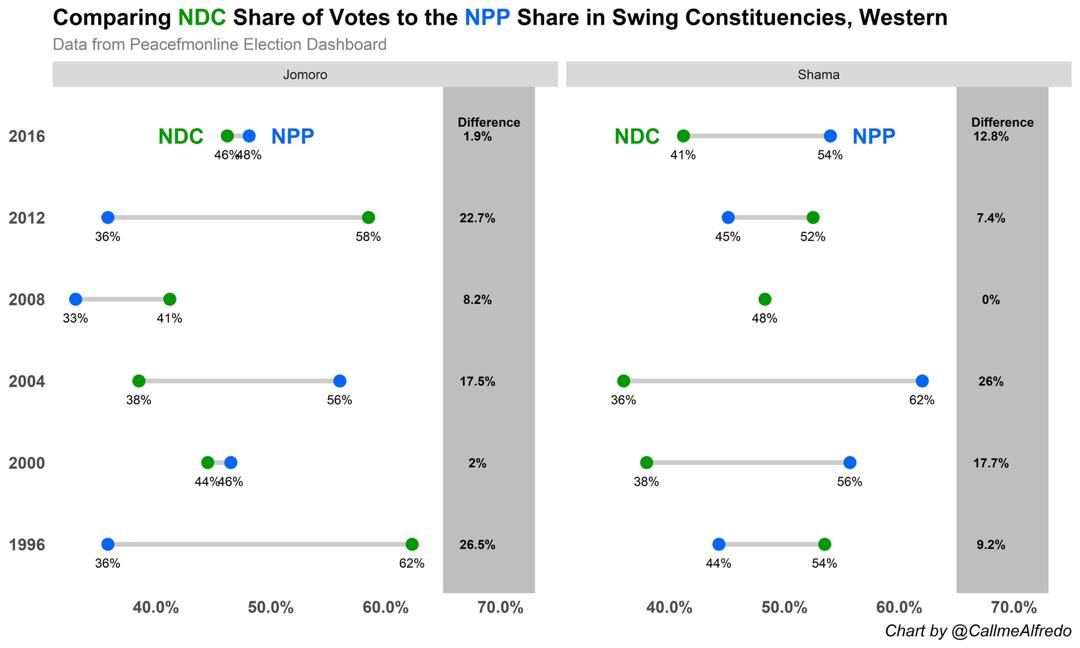 Based on traditional and social media trends, it appears one of the most popular parliamentary contests is the battle for the Ayawaso West Wuogon parliamentary seat. I think that is fuelled by the campaign styles of both candidates, and because the NDC is fielding a popular Ghanaian actor, John Dumelo. The NPP has held that seat since 2000. Based on past voting trends, NPP candidates have enjoyed an average of 10 percentage points over NDC candidates. In 2016, the NPP candidate (the late Hon. Emmanuel Agyarko) won by over 18 points.

This contest reminds me of the fierce contest between the late Hon. Agyarko and Mr. Kwame Awuah Darko in 2012. I see a lot of intersection in the campaign-style of Mr. Dumelo and that of the late Hon. Agyarko. Will that be enough to overcome the 18-percentage point gap Mr. Dumelo faces? One of the contributing factors to Mr. Agyarko’s victory was his popularity on the University of Ghana campus (Agyarko pure water no aba too). With the calendar of the University community getting disrupted by public health restrictions imposed to limit the spread of COVID-19, how much say would University of Ghana polling stations have in choosing the next MP for AWW?

Outlook for presidential elections: What are the polls saying?

Yes, we know that the real polls happen at the polling stations! Yes, we know the polls can be (and have been) wrong. But what is an election analysis with no reference to the polls? So far, the polls are all pointing to a strong resounding victory for the #4MoreForNana agenda. The vote difference between the two top candidates ranges from seven points to as high as 15 points in favour of H.E Nana Addo Dankwa Akufo-Addo. It appears the voters are satisfied with his performance and would like more of him!

The writer, Alfred Appiah is a data scientist, mostly posting his visualization products on his Twitter timeline @CallmeAlfredo.

Kofi Annan’s Secretary-Generalship is a highlight of my career - Dr. Spio-Garbrah