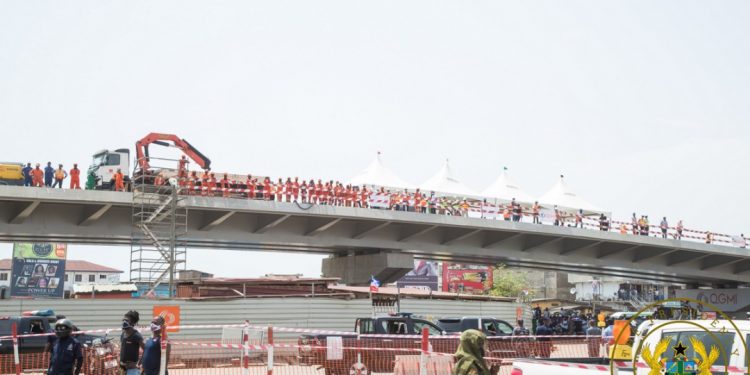 The Minister for Roads and Highways Kwasi Amoako Atta has disclosed that the first tier of the Obetsebi Lamptey Interchange project will be opened to traffic by next week.

According to the Roads Minister, the first phase of the project is over 90 percent complete.

The Obetsebi Lamptey project is a three-tier interchange consisting of the Graphic Road flyover to separate traffic on the Kaneshie-Mallam road.

Speaking to the media after inspecting the ongoing project, Kwasi Amoako Atta expressed satisfaction with the work done.

“It’s left with the directional signs and the traffic lights and other things that ought to be provided will be provided. So at least by Monday and Tuesday, everything will be set for the commissioning.”

“This is the first phase, and we are opening the bridge to traffic so this long queues and traffic that you are seeing now will no more be there hopefully from Monday because it’s one composite project and there won’t be any break after the commissioning so the contractor will continue with the other works.”

Meanwhile, inspecting some drains at the Hansonic junction around Kaneshie, the Minister expressed great worry about the poor hygiene practised by residents of the area.

“The entire drainage is completely blocked and that is why the rainwater is always overflowing unto the road and the residents are complaining making motoring difficult and it’s causing great discomfort and great inconvenience to people because the drainage systems have been silted and until all of us as Ghanaians stop throwing rubbish into the gutters this won’t stop.”

President Nana Akufo-Addo in October 2019, cut the sod for the construction of the project.

The construction of the interchange, according to the President, will help address the congestion being faced by commuters at the Obetsebi-Lamptey roundabout and will help improve mobility on the Ring Road corridor.

The President explained that government decided to construct the three-tier interchange at the Obetsebi-Lamptey Circle to ease traffic among others.

The president in cutting the sod said, “The ground level will have a re-modelled roundabout, whilst the second tier will be an east to west flyover linking the Graphic Road to the Kaneshie-Mallam road. The third tier will be a north-south flyover on the Ring Road West, which will link the Ring Road from the Royal Chapel Church to the Central Mosque at Abossey Okai,” he said.

“Critical drainage structures that go through the roundabout will be upgraded under this project. This is necessary to reduce the incidence of flooding at the roundabout,” the President added.