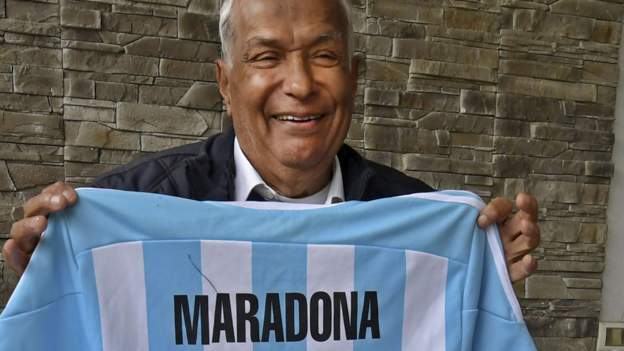 The Tunisian referee from England’s infamous defeat by Argentina at the 1986 World Cup says he is “proud and honoured” to have helped Diego Maradona score the “goal of the century”.

Maradona, who died on Wednesday at the age of 60, beat several England players on a mazy dribble from just inside his own half before scoring to put Argentina 2-0 up, four minutes after scoring the controversial goal he famously credited to the “Hand of God”.

Referee Ali Bin Nasser, now 76, also said he had no option but to award the first goal and recalled how Maradona gave him a signed shirt when they met again in 2015.

On the second goal of the game, Bin Nasser told BBC Sport: “He took off from midfield, and I was shadowing him closely. When you’re refereeing someone like Maradona, you can’t take your eyes off them.

“They tried to take him down on three occasions, but his desire for victory kept pushing him forward.

“Every time I would shout ‘advantage’ until he reached the box.

“I was watching from outside the box, wondering how this player shook off three defenders, and sprinted for nearly 50 metres. I thought ‘the defenders will try to take him down now’. I was expecting that to happen and was ready to whistle for a penalty.

“To my surprise, he dribbled past another defender and the goalkeeper [Peter Shilton] to score what would become ‘the goal of the century’.

“I’m proud and honoured as a person and as a referee for having played a role in that historical achievement.

“Had I whistled [for] a foul in any of the first three contacts, we wouldn’t have witnessed something that magnificent. That advantage I gave is one my proudest achievements.”

Bin Nasser added that the 1986 quarter-final, played in front of nearly 115,000 fans at the Estadio Azteca in Mexico City was the “highlight” of his career, despite his decision to the controversial first goal.

“I remember it vividly,” he continued.

“The English defender [Steve Hodge] had the ball, sent it back and Maradona was in the air with Peter Shilton, and they were both facing away from me.

“They were facing my assistant referee, the Bulgarian Bogdan Dochev.

“I was hesitant at first, I glanced over to Dochev, who was headed back to the centre of the pitch, confirming the goal. He didn’t signal for handball.

“The instructions Fifa gave us before the game were clear – if a colleague was in a better position than mine, I should respect his view.”

Dochev, who died in 2017 aged 80, would later say that “Fifa did not allow assistants to discuss decisions with the referee”.

“If Fifa had put a referee from Europe in charge of such an important game, the first goal of Maradona would have been disallowed,” he insisted.

However, Bin Nasser says the sportsmanship shown by the England players was “beautiful”.

He recalled: “Gary Lineker came over to me and said ‘please referee, handball!’ I replied: Please play!’

Lineker pulled a goal back for England with nine minutes remaining and then came close to an equaliser.

“When England scored their goal, I secretly wanted them to score the equaliser,” admitted Bin Nasser.

“I wanted to enjoy that game for 30 more minutes. It was an absolute joy from start to finish.

“Despite the heat that day, I wanted things to go on. It was a beautiful game between two great teams.”

When Maradona came to Tunisia in 2015, he visited Bin Nasser at his home.

“I told him ‘it wasn’t Argentina that won the World Cup that year, it was Maradona’,” said the Tunisian.

“He replied: ‘Had it not been for you, I wouldn’t have been able to score the goal of the century.’

“He gave me a signed jersey that said ‘Para Ali Mi Amigo Eterna’.”