Slain Mfantseman MP to be laid to rest tomorrow 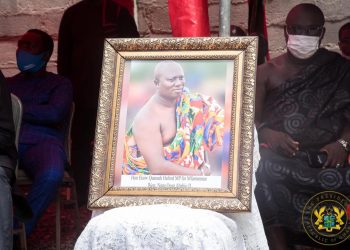 Slain former Member of Parliament (MP) for the Mfantseman constituency in the Central Region, Ekow Quansah Hayford is expected to be laid to rest tomorrow, Saturday, November 28, 2020.

Ekow Hayford was killed by unknown assailants believed to be armed robbers on October 9, 2020, when he was returning from community engagements.

Some eight persons are currently standing trial for their alleged involvement in the murder of the late MP.

President Akufo–Addo who is on a 3-day tour of the Central region is expected to attend the funeral service of the late MP.

The NPP’s Mfantseman Constituency Secretary, Bentum Quainoo told Citi News that: “those who will go to the mortuary for the corpse are waiting for clearance. After that, we will first stop at Nyamoransa, so they can mourn with us. From there we’ll go to Domenase and then finally go to Mankessim, where we will hand over the body to the family”.

He also indicated that there will be no wake-keeping today, Friday.

“National, Regional, and Constituency Party members will be around to help. The President himself will be there with us,” Mr. Quainoo added.

The State has substituted its charge sheet against the eight accused persons being held in connection with the killing of Ekow Hayford.

The robbers were said to have demanded money upon stopping the campaign vehicle that the late MP identified himself.

When he said he didn’t have money but suggested they took him home, so he gives them the money, they shot him and killed him.