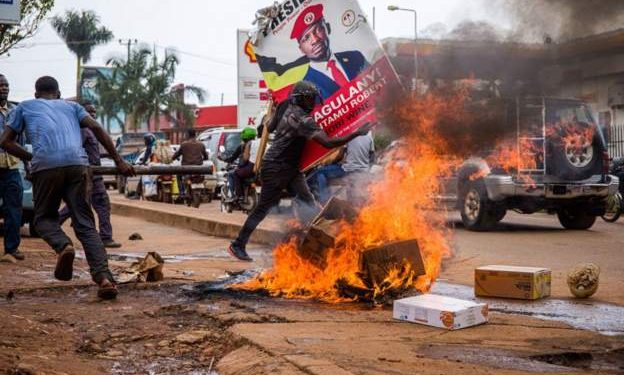 Police in Uganda say three people have died and dozens injured in protests in the capital and other urban areas following the arrest of presidential candidate Robert Kyagulanyi, known as musician Bobi Wine, during an election rally.

The police statement did not say how the three people died.

But videos and photos have been circulating on social media, showing people covered in blood, some seemingly unresponsive, apparently shot dead.

Over 30 people were injured in the chaos, the statement adds.

Sporadic protests had broken out in Kampala and other towns, as Bobi Wine’s supporters called for his release.

He had been detained in the eastern district of Luuka, after the police accused him of staging an election meeting that broke the coronavirus guidelines set by the Electoral Commission.

His lawyers have told the BBC that the presidential contestant was being held at a police station in Jinja City.

Another opposition candidate, Patrick Amuriat Oboi, has also been arrested.

His rallies and events have been blocked by police on several occasions.

Uganda will hold presidential elections in January and, so far, campaigns have been marked by police violently enforcing pandemic restrictions