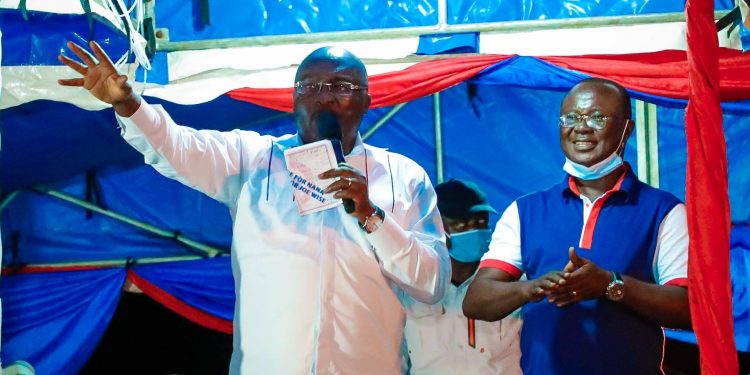 The Vice President, Dr. Mahamudu Bawumia says the Nana Addo Dankwa Akufo-Addo has created over two million jobs in the formal sector in its first term in office.

Dr. Bawumia cited government interventions such as NABCo, Planting for Food and Jobs as part of the programmes through which the jobs have been created.

According to him, the Akufo-Addo administration saw the unemployment situation in the country as a national security threat and had to find innovative ways of creating jobs to arrest the situation.

He insisted that the erstwhile Mahama administration worsened the unemployment situation in the country due to the mismanagement of the economy.

Speaking on Ghana’s economy during the government’s Nation Building Updates, on Thursday, November 26, 2020, Dr. Bawumia said the Akufo-Addo government has the Ghanaian youth at heart.

“We have created jobs, especially for the youth. Another challenge we sort to address was the hopelessness and the despair that a lack of employment opportunity under the previous erstwhile government had plunged our youth into. The human cost imposed of a long line of able-bodied, educated youth of this country by the economic mismanagement of the NDC government had grown to become a national security threat.”

“Nothing is more dehumanizing and more frustrating for young people than being jobless. Again we did not run away from the challenge. We took the bull by the horn and in four years we have created over two million jobs in the formal sector including through government programmes such as NABCo, YEIP, Planting for food and jobs amongst others,” he said.

About the Nation Building Update

The Nation Building Updates is a weekly event organized by the government under the auspices of the Ministry of Information on Tuesdays and Thursdays.

This is to afford the government the opportunity to account for the Ghanaian people on its achievements in the first fours of being in office.

So far, all the 16 Regional Ministers and some sectoral ministries have all rendered account of their stewardship.