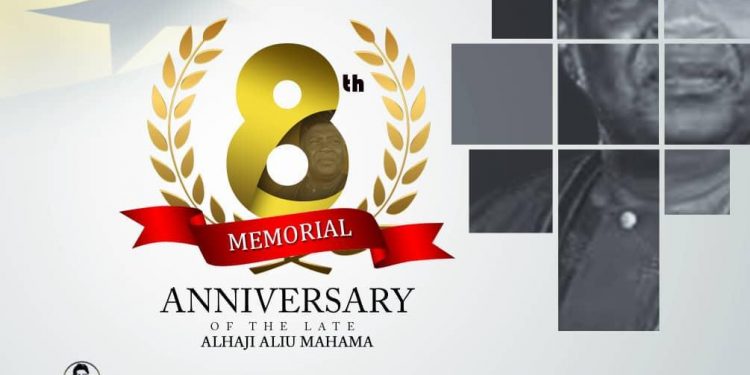 The People of Dagbon are set to celebrate the 8th anniversary of the passing of the late former Vice President, Alhaji Aliu Mahama.

The week-long celebration in Yendi will feature life-touching activities to eulogize the legacies of the former Vice President.

According to the Executive Director of the Aliu Mahama Foundation Dr. Samuel Frimpong, the anniversary is meant to replicate the iconic and fulfilling life of the late Aliu Mahama.

He added that “the anniversary will avail the opportunity for the Foundation to continue with its projects and programmes aimed at transforming the lives of the people of Yendi.

The week-long event will begin with the launch of “Zongo Laafia” by Second Lady Hajia Samira Bawumia, a health and wellness outreach program on Wednesday 11th November 2020.

The Foundation in a press statement on Monday said it will hold the 4th Memorial Lecture of the late Vice President.

“The lecture shall be delivered by the Minister of Information, Kojo Oppong Nkrumah under the Theme: Dagbon to the World; the example of Alhaji Aliu Mahama” the statement indicated.

As part of activities also lined-up for the 8thAliu Mahama Anniversary celebration, the Guest of Honour for the Memorial Lecture will be businessman, CEO of McDan Group, Dr. Daniel McKorley who will launch the McDan Skills Development Center in Yendi to empower the youth with employable skills.

The Foundation further indicated that there will be a photo exhibition of the former first Muslim Vice President who served under the Kufuor-led NPP administration between 2001 and 2009.