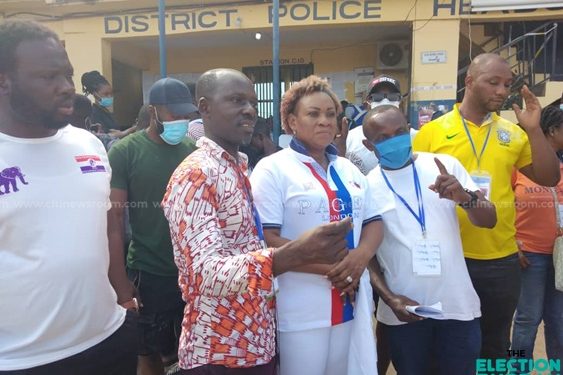 The incumbent Member of Parliament for Awutu Senya East, Mavis Hawa Koomson has denied being behind the shooting incident that happened at the Steps to Christ polling station on Monday, December 7, 2020.

Two persons sustained gunshot wounds near the polling station in Kasoa in the Awutu Senya East constituency after some men in a black SUV fired at them.

The MP who won the parliamentary elections in the Awutu Senya East constituency with close to six thousand votes as against her rival Naa Koryor Okunor of the NDC denied the claims and stated that she initially targeted winning the election by nine thousand votes but the shooting incident at the Steps to Christ Registration centre prevented her supporters from voting massively in the election.

“After casting my vote I went back home because I knew the Lord was fighting that battle for us. This battle was not won on a silver platter, it was not easy spiritually or physically but at the end of the day, I was the winner, I have won once again. History has been made again. My initial target was to win by 9,000 votes and although I did not reach it I still won.”

“Yesterday you heard a lot of rumours, people thought they could use those rumours to win the seat. Like I mentioned earlier, I didn’t go out yesterday but I got the information that people said they saw me outside with a gun and I shot someone so some of my people did not even come out to vote and some of my other supporters did not vote for me because of the rumour but I still managed to win,” she added.

The winner of the Awutu Senya East seat Mavis Hawa Koomson promised massive infrastructure in her next term.

“I will finish all the projects that I started. I will also bring in new projects. We know that the major problems of Awutu Senya East are roads, drains and jobs and I will solve all these problems and make the people happy.”

Meanwhile, the Awutu Senya East Municipal Chief Executive and Head of the Municipal Security Council, Michael Essuman Mensah has made claims that the shooting that happened near the Steps to Christ polling centre was staged.

According to the MCE, the NPP is unaware of the shooting incident.

Speaking to Citi News, the MCE discussed the shooting and how he received intel about it yesterday.

“There have been gunshots in a community called peace town. In fact, yesterday just around five-o’clock the NDC went for a meeting. They closed the meeting around seven-thirty pm. Then I had the intel that they were going to stage fake incidents and blame the MP,” Mr. Mensah said.