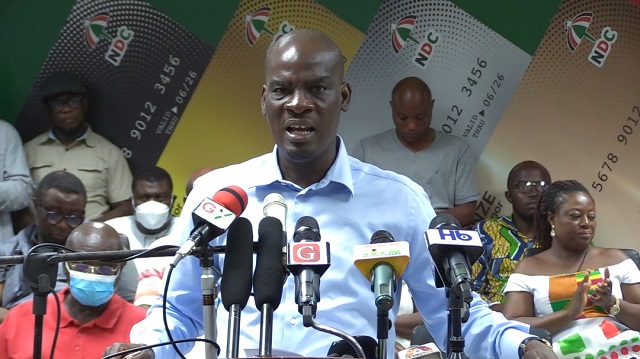 The opposition National Democratic Congress (NDC) is distraught that a petition sent by its presidential candidate, John Dramani Mahama to the Electoral Commission (EC) to express his disquiet with the presidential results of the just-ended 2020 general election, was turned down without recourse.

According to the NDC, John Mahama presented the petition to the EC ahead of the declaration of the final results because he had serious concerns over the collation process.

At a press conference by the party on Wednesday night following the EC’s declaration of the results, the NDC said it cannot fathom why the electoral management body decided not to give a hearing to John Mahama who had contested the polls.

Minority leader, Haruna Iddrisu who addressed the media, maintained that the EC’s failure to properly address the petition filed by the NDC spells doom for Ghana’s enviable democracy.

“Even when he [NDC] filed a petition to the Electoral Commission today detailing his concerns of the processes of collation leading to the declaration, that was treated with utmost contempt. We consider that unacceptable. He asked the EC to address his grievances and concerns as a candidate but was ignored by the chairperson of the EC. The declaration of the Electoral Commission also smacks of bad faith,” he decried.

Haruna Iddrisu insisted that “this evening Ghana’s democracy has come under severe attack and needs some rescue urgently. If not rescued these attacks will foster and grow into future elections and that will disfigure our track record, as a true democratic nation.”

In furtherance, the NDC has served notice that it has rejected the outcome of the December 7 polls because there is incontrovertible proof that the election was flawed.

The defeated party also says it does not recognize incumbent President, Nana Addo Dankwa Akufo-Addo as the rightfully-elected President of Ghana.

“As a party, we have had extensive consultations and detailed analysis of the outcome of the elections as announced by Jean Mensa. We have come to only one irresistible conclusion, that it is a flawed discredited election and therefore we reject the presidential result without any reservation. We roundly reject and outrightly reject the declaration of the sitting president as the winner of the 2020 elections. In due course, our flagbearer will brief the nation and the international community,” Haruna added.