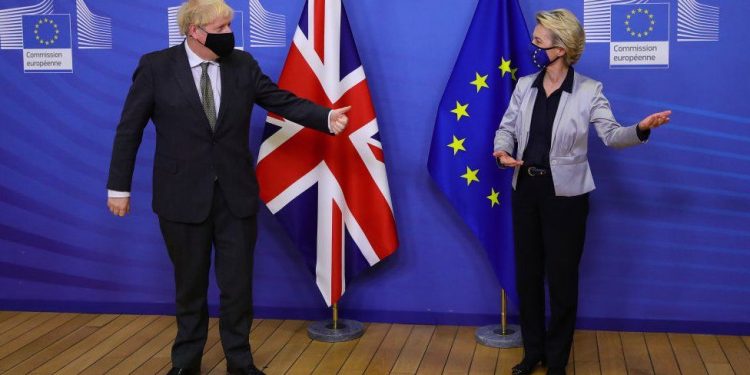 Post-Brexit trade talks have gone through the night as the UK and EU enter a critical day – with leaders set to decide whether a deal can be done.

Both sides have warned they are unlikely to reach an agreement.

The terms offered by the European Union continue to be “unacceptable” to the UK, according to a government source.

Boris Johnson is expected to speak with European Commission President Ursula von der Leyen at lunchtime after agreeing the Sunday deadline this week.

If the two sides have not come to an agreement, Mr Johnson and Mrs von der Leyen will decide whether to abandon negotiations or continue them beyond the deadline.

Speaking to Sky’s Sophy Ridge programme, Foreign Secretary Dominic Raab said the ability of getting a deal rests with the leaders, saying: “What ultimately is required at this 11th hour is moving the political logjam.”

He said the UK “can’t close the door” on future talks after Sunday, but there is now a “very high bar” to continue, adding: “We are not there yet”.

Taoiseach (Irish prime minister) Micheál Martin said he believed a no-deal scenario “would be very bad news for all of us” and “an appalling failure of statecraft” on both sides.

He told the BBC’s Andrew Marr the fact talks had gone overnight gave him “hope” there would be agreement, and called for the teams “with any bit of energy we have left [to] focus on negotiating a deal”.

And speaking to the same programme, Labour’s former leader Ed Miliband said no deal “would be disastrous for the country”, adding that it would be a “disgrace” for the PM not to agree one.

He said: “[Mr Johnson] has been cavalier with our national interests and is playing Russian roulette with jobs and livelihoods of people up and down the land.”

What are the two sides stuck on?

The main sticking point in the talks is how close the UK should stick to EU economic rules in the future.

The EU is determined to prevent the UK from gaining what it sees as an unfair advantage of having tariff-free access to its markets – not paying taxes on goods being bought and sold – while setting its own standards on products, employment rights and business subsidies.

Fishing rights is another major area of disagreement, with the EU warning that without access to UK waters for EU fleets, UK fishermen will no longer get special access to EU markets to sell their goods.

But the UK argues that what goes on in its own waters, and its wider business rules, should be under its control as a sovereign country.

The government confirmed on Saturday that no-deal preparations had seen Royal Navy vessels prepared to tackle “threats of illegal fishing” in UK waters.

Outlining the steps taken to prepare for all Brexit eventualities, a UK government spokesman said: “We’ve run live exercises moving fresh produce and fish across the border, and scrambled naval vessels to respond to threats of illegal fishing in our soon-to-be sovereign waters.”

The two sides also disagree on whether the European Court of Justice should settle future UK-EU trade disputes.

It is not clear how any decision to abandon the talks will be made public and there is a chance political leaders will decide to continue negotiations beyond Sunday, BBC Europe correspondent Kevin Connolly said.

A government source said: “The prime minister will leave no stone unturned in this process, but he is absolutely clear: any agreement must be fair and respect the fundamental position that the UK will be a sovereign nation in three weeks’ time.”

Foreign Secretary Mr Raab said the UK “wants to be treated like any other independent and self-respecting democracy”, but claimed the EU was “concerned the UK might do very well when it leaves…. and is worried about the competitive advantage.”

Philip Rycroft, who was a civil service head at the UK Department for Exiting the European Union between 2017 and 2019, told BBC Breakfast things were “looking a bit grim” for a trade deal.

“Frankly, the energy seems to be draining out of this,” he said. “I think if we were heading for a deal you’d be seeing a lot more diplomatic activity – there would be signs of a lot more conversations going on.”

Meanwhile, the National Farmers’ Union has warned there will be “significant disruption” to the sector if the UK fails to reach a trade deal with the EU.

The EU is the largest trading partner for British farmers – but without a deal by the end of the Brexit transition period on 31 December, farmers could lose free access to the bloc “overnight”, the union said.

Elsewhere, Labour warned that staffing levels in the government’s tax and customs agency had barely been scaled up since the Brexit vote, despite widespread customs changes expected even if the UK is able to secure a deal.

The party said its analysis suggested the number of UK customs officials had been boosted by just 16, despite a pledge from ministers in 2018 to recruit between 3,000 and 5,000 extra officials.

This weekend’s deadline was set by Mr Johnson and Mrs von der Leyen following a meeting in Brussels on Wednesday, after months of talks failed to achieve an agreement.

Mr Johnson said the EU needed to make a “big change” over the main sticking points on fishing rights and business competition rules, while Mrs von der Leyen said no deal was the most probable end to “difficult” talks.

The EU has rejected Mr Johnson’s request to bypass the European Commission and speak directly to French President Emmanuel Macron and Germany’s Angela Merkel about the unresolved issues.

According to EU officials, he was told discussions could only take place through the bloc’s chief negotiator, Michel Barnier.

Speaking on Friday, the PM said a no-deal Brexit was now “very, very likely” and that planning for that outcome was ramping up.