Fact check: 2020 election ballot papers have NOT been designed to cause Mahama to lose votes 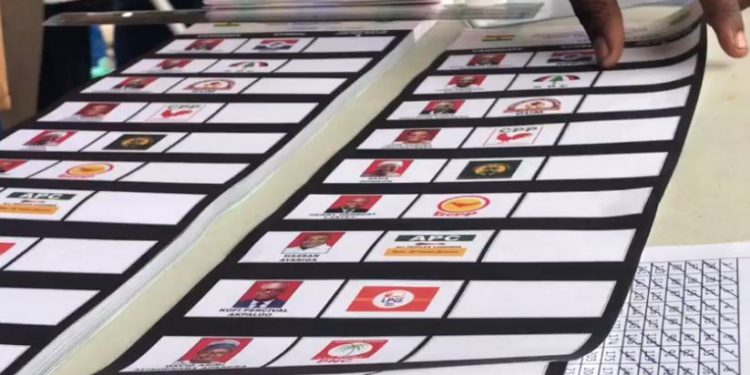 Claim: Viral video shows ‘sample ballot papers’ claiming election 2020 ballot papers have been designed to cause John Mahama to lose votes to rejected ballots due to smaller box for thumb-printing.

Verdict: False. The supposed election 2020 ballot paper which was used in the video is not a sample of the official ballot paper that will be used for the polls. The design of boxes for thumb-printing on original paper is uniform for all candidates.

A 3.31 minute-long video making rounds on social media says the presidential ballot papers printed by the Electoral Commission (EC) for the 2020 polls have been designed in a way that makes it easy for persons who want to vote for candidate John Mahama to have their votes rejected.

In the video, a man is heard making the claim and demonstrating what voters must do to ensure that their vote for Mahama is not rejected.

He said the boxes in which voters are expected to thumb-print beside their preferred candidates are not even.

The unknown man says the box beside President Akufo-Addo’s image is the biggest on the ballot while those beside John Mahama and the candidates are too small to accommodate one’s thumb.

“When you look at how the Electoral Commission designed the ballot paper, it made the box beside Nana Akufo-Addo’s image big enough. Even if you look at the image, Nana Akufo-Addo’s image is bigger that John Mahama’s as well as the other candidates. So if you want to vote for Mahama, use your small finger to vote for him. If you use your thumb, the box will be filled and extend outside the box because they want to reject the vote, that is why we are doing this video,” the man is heard saying in the video.

We retrieved a frame from the video that shows the supposed ballot paper designed to cause candidate Mahama to lose votes for further analysis. 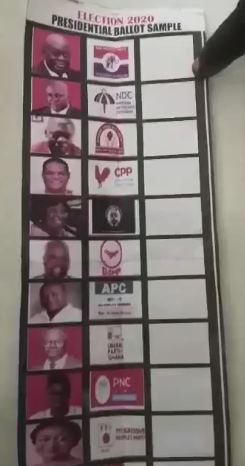 From the information on the ballot paper used in the video, the material is a sample of the original ballot paper to be used for the December 7 polls.

With the underlying understanding that that photos of all presidential candidates are on a red background, we had reasonable grounds to suspect that that ballot paper used to make the claim in the video was not a sample of the actual ballot paper to be used by the Electoral Commission (EC) for the December 7, 2020 elections.

This is because photos of some of the presidential candidates on the ballot paper are not on red backgrounds.

Again, a video posted by Citi FM’s Caleb Kudah on Facebook from the Madina Police Station polling station during the special voting exercise on December 1, 2020, showed that the actual presidential ballot paper for the 2020 polls is significantly different from what was used in the viral video.

Contrary to claims in the viral video about the box for thumb-printing for candidate Nana Akufo-Addo is bigger than those of the other 11 candidates, the video showed that they were of the same size.

Again, the photos of all the presidential candidates were of the same size and on red backgrounds unlike the one in the viral video.

Despite being illegal, some voters in the special voting exercise have uploaded photos of their ballots online. Some of them, as posted here and here confirm the look and appearance of the video shared by Caleb Kudah and completely different from what was shown in the viral video.

Based on the above evidence, we conclude that the viral video suggesting that the Electoral Commission (EC) has designed ballot papers in a way that will cause John Mahama to lose votes to rejected ballots is false. 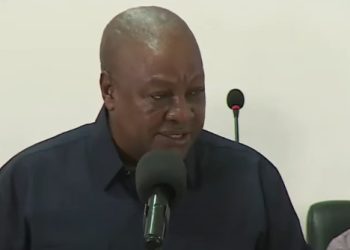 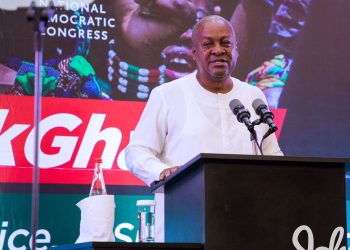