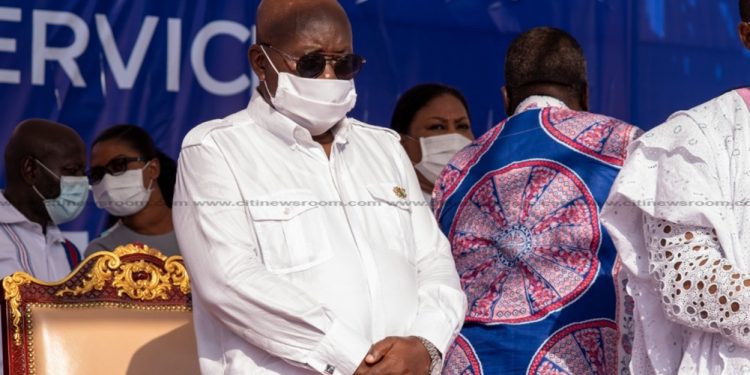 President Nana Addo Dankwa Akufo-Addo says he will not be vindictive or deprive the many Ghanaians who did not vote for him in the 2020 presidential election of development.

He says such persons need not be troubled because he is committed to an equal distribution of the national cake.

While thanking the those who ensured his successful re-election bid, Nana Addo singled out those who voted against him saying “I will have their interests at heart and in mind in all that I do”.

President Akufo-Addo gave the assurances on Sunday [December 27, 2020] at the State House when he addressed the NPP’s interdenominational service to thank God for the party’s election victory.

“I want to thank the people of Ghana for maintaining their confidence in the leadership of the nation, especially the over 6.7 million people who voted for me. But in singling them out, I want to also assure the 6.2 million people who did not vote for me, that I will have their interests at heart and in mind in all that I do,” he noted.

The president said the time has come for Ghanaians to collectively uphold the peace and tranquility of the country after the 2020 polls.

He believes that the biggest lesson of the recently held presidential and parliamentary election is the shunning of actions that have the propensity of throwing Ghana into a state of disarray.

“We have to take the lead in bringing to fruition, the main teachings of this election – which is that all persons of goodwill, no matter their political affiliation have to work together to secure the peace, prosperity and progress of our nation”, he stated.

He said the NPP, following the elections, possesses a renewed commitment to ensure the success of Ghana’s democracy noting that all hands must be on deck to forestall post-election tensions that may derail the economic and social development which has been achieved over the past years.

“This occasion enables us of the NPP to renew our commitment to the promotion of democracy and good governance in our nation and also recommit ourselves to work for the rapid development of our nation and its economy so we can bring prosperity to all the people of Ghana without discrimination. This is a tough task but one that is at the centre of this noble political tradition to which we belong and it is one that calls us to duty, service, and sacrifice”, he said.

The President added that Ghana remains a cradle of democracy and good governance in the world hence, the need for both government and the citizenry to work together to maintain this enviable status.

He further assured state institutions of the necessary support to enable them to carry out their duties in a congenial environment devoid of any form of chaos.

“Ghana continues to stand as a beacon of democracy, good governance on our continent and around the world. It is our responsibility and generation to do everything possible to maintain this standing and reputation. On my part, I will do whatever I can and spare no effort to ensure that the institutions of our Republic and our democratic engagement are not disturbed and are continued in full force in effect for the welfare and benefit of the people of Ghana”.