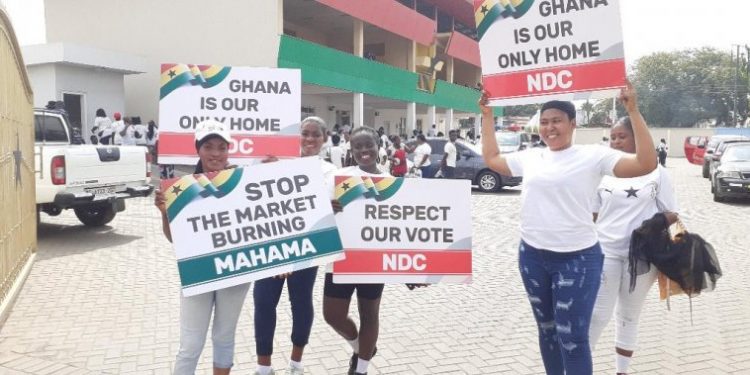 The General Secretary of the NDP, Alhaji Mohammed Frimpong, who spoke to the Ghana News Agency at a cancelled march said it had become crucial for Mr. Mahama to accept that he lost the elections and congratulate the winner, not only to protect the peace and stability of the country but to also preserve and affirm the country’s enviable democratic credentials.

He thus appealed to the NDC to stop the continuous protests, said the 2020 elections would go in history as the most transparent and peaceful elections in the fourth republic, contrary to claims by some sympathizers of the NDC.

“It is therefore surprising that the NDC and Mr. Mahama will find it difficult to accept the unequivocal verdict of the Ghanaian people as put out by the Electoral Commission, which has been corroborated by the Coalition of Domestic Elections Observers, and endorsed as free and fair by Civil Society Organizations, the European Union Observer Mission, ECOWAS Observer Mission and indeed by the International Community,” he said.

Alhaji Frimpong said the NDC was the only party that thought the 2020 election was not credible and transparent and that the Constitution of Ghana and Cl 127 provided them with a remedy to seek redress in court instead of the persistent protests.

He said the party’s posture of projecting violence and protests, incite their supporters, which undermine the peace and tranquillity of the country and must be condemned at all angles.

“The NDC cannot in one breadth touts itself as a democratic party and yet fails to use a democratic process to resolve its grievance. It is only the courts that can grant the reliefs the party seeks and not continuous unlawful protests.”

The NDP scribe also appealed to Mr. Mahama and the leadership of the NDC to call their supporters to order and proceed to court to challenge the outcome of the 2020 elections if he was not satisfied with the results.

He called on the security agencies to be resolute and protect the State and safeguard the country’s peace from any untoward protests, urging that the NDC party appeal put the national interest ahead of personal interest.

The Electoral Commission on December 9 declared Candidate Nana Addo Dankwa Akufo-Addo of the New Patriotic Party as the winner of the Presidential election, securing 51.302 percent while Candidate John Dramani Mahama of the NDC 47.359 percent.