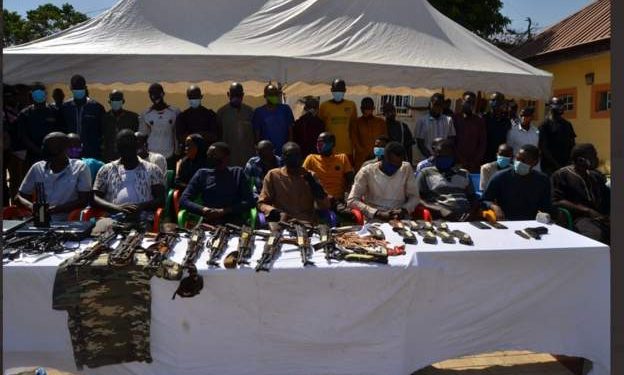 Police in Nigeria have paraded a group of 35 crime suspects during a media briefing to counter allegations that photos they had originally shared on social media were photoshopped.

On Tuesday, the police shared a picture of a man and a woman accused of involvement in violent crime.

At first glance the photo appears to show two suspects standing in front of a table of assault rifles.

Look closely though, and the problems are hard to miss. The two people have blurry white borders around their heads. The guns look badly edited in. There are random reflections in a window behind them.

The post soon triggered massive reactions online. Thousands of retweets – and rising. In the comments below – the majority of them castigating the police – people pointed out what they said was a bad photoshop job.

But the police tweeted on Wednesday: “The pictures are authentic and true representation of the suspects and exhibits.”

They explained that the pictures “were taken separately and merged into one screen for seamless understanding of the story line,” the post said.

The post added: “The arms showcased in the picture were the exhibits recovered by Police operatives from the suspects.”