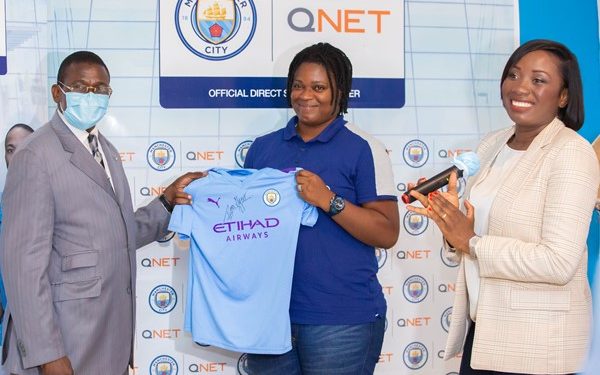 The English Premier League match between Manchester City Football Club and West Bromwich Albion was an opportunity for QNET to host and engage the leadership and key journalists of the sports fraternity in Ivory Coast and by extension, the West African sub-region.

The event, which was held as a dinner, presented QNET the platform to explain the importance it attaches to the partnership with Manchester City FC, the game of football and how this collaboration with the world of sport could be localized across the company’s operation in West Africa.

It was in the presence of some forty distinguished personalities such as the presidents of local championship football clubs, UNJCI, the national union of sports press, luminaries of sports journalism, representatives of the local and international press, presidents of football academy, partners from Ghana and Liberia, QNET independent representatives, that QNET unveiled its commitment to sports and the game of football.

One of the aims of the engagement is to engage with the world of sport and roll the dice for a future collaboration with the football fraternity in Côte d’Ivoire, and in the West African sub-region.

Representing its Regional Director General, the Director of Public Relations, Maxime PETI explained the reasons for QNET’s commitment to football.

“QNET, as a leading direct selling company, offers a wide range of products and services to its independent representatives who promote them and collect commissions based on their performance. To do so, they build strong and viable teams that are made possible by team spirit, hard work, passion, unity and togetherness; values dear to the game of football as well. It is with these shared values that QNET and the game of football have forged a winning partnership. The partnership between QNET and Manchester City Football Club is a perfect illustration of team spirit, hard work, passion unity and togetherness.”

Mr. Biram Fall, Managing Director QNET Africa Market Development, rightly commented: “Football is a universal language, spoken on the pitch and in the stands, uniting players and fans with a common passion for the game. The excitement and pride that Manchester City fans feel is the same excitement and passion that QNET customers have for our business. We all achieve success, thanks to team spirit, passion and perseverance.”

In Africa, QNET’s partnership with Manchester City is paying off. Last year, QNET financed a summer internship bootcamp in football and English language for 3 young football players from underprivileged backgrounds from Ghana, Cameroon and Côte d’Ivoire. The aim of the programme is to give these young people a chance to rub shoulders with the world of high-level sport and thus improve their performance.

The event was an opportunity for QNET to launch the 3rd collection of its limited edition CIMIER QNETCITY watch, a Swiss-made watch, mounted in Switzerland by the QNET branch, CIMIER, in tribute to the partnership with Manchester City Football Club. The first two editions were successfully launched, in 2016 and 2018 respectively.

Mr. JR Mayer, Director of Sales and Marketing at Swiss watchmaker Cimier, describes the design aspects of the collection in these terms: “The collection presents a fusion of sport and elegance, inspired by football and its inherent geometry. The octagonal bezel blends well with the strong and dynamic character of the dial. We’ve added precise details to the built-in crown and custom loop with a deployment system that secures the watch. We felt that the subtle integration of the Manchester City Football Club’s signature blue on the dial and in the stitches of the rubber strap gives it a bold and unique design.”

The evening ended with the symbolic presentation of a few copies of the new watch to the presidents of the main Ivorian football clubs and the presentation of the original jerseys of the Manchester City Football Club, to the captain of the team of the 11 sisters of Gagnoa, Ivorien national champion.

Controversial Public Universities Bill to be debated in Parliament again