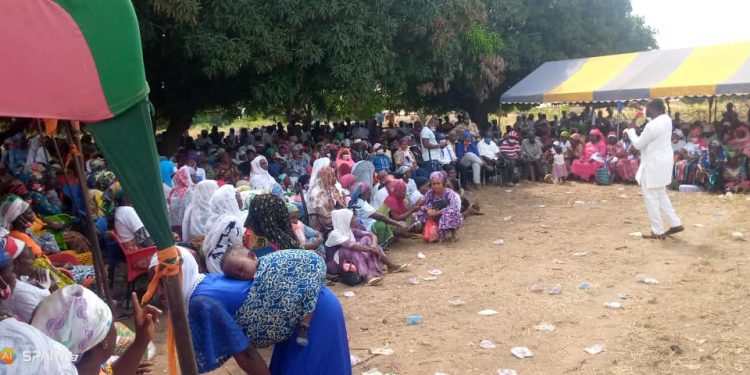 The women’s wing of the New Patriotic Party (NPP) in the Wulensi Constituency in the Northern Region have declared their commitment to secure victory for the party in the December elections.

They demonstrated their loyalty and unwavering commitment towards the victory of the NPP when they came out in their numbers to endorse the 2020 victory program of the party over the weekend.

Alhaji Haruna Abdulai who is a member of the Northern Regional campaign team of NPP with responsibility for Wulensi mobilized the women to throw their weight behind the Presidential candidate of the NPP, Nana Addo Danquah Akufo-Addo, and the Parliamentary candidate of the NPP Thomas Ogajah.

Addressing the women, the NPP kingpin outlined a number of development measures designed by the party and tailored towards empowering women in the country.

He again explained the major policy initiatives introduced by the government to industrialize the country with the ultimate objective to alleviate the suffering of rural women in the country.

“Government is very concerned about the development of the country and therefore, a number of pro-poor policies and programmes have been developed to industrialize the country, and create jobs for many unemployed youths. These policies have also factored into account, the welfare of women especially those in rural areas.”

“That is why we are constantly saying that we have demonstrated beyond every reasonable doubt that in the last four years that we have been in government, we have done significant things to show that we care about women” he added.

Alhaji Haruna Abdulai assured the women that the party would continue to offer assistance to businesses whether small or large to scale up production.

All these laudable initiatives, he underscored, would enhance the social and economic wellbeing of citizens especially women.

According to the businessman, the Wulensi seat remained vital to the political fortunes of NPP in Nanung, and therefore must be jealously protected.

Under the circumstance, he appealed to the women in the constituency to demonstrate their commitment to the victory of the party.

Alhaji Haruna was grateful to the women for their show of love to him and their commitment and resolve to transfer the same love at the polls to the candidates.

“You must take the campaign to the doorsteps of communities, spread the good message of the party and our candidates because we must win convincingly in this constituency” he concluded.

The Member of Parliament (MP) for the constituency, Thomas Ogajah, also appealed to the women to expand the scope of their campaign activities and win more souls for the party ahead of the December elections.

As the Parliamentary candidate of the NPP, Thomas Ogajah pledged to work with Alhaji Haruna to set up a Business Development Fund (BDF) for the women in the constituency.

The fund, he noted, would primarily provide capital for start-ups and existing businesses already operating in the area to keep the women active, proactive, and productive.

Other leading members of the party who graced the occasion also shared their experiences with the women as the campaign in the constituency reaches the last stretch.

The party kingpins anticipate a landslide victory in the constituency barring any unforeseen circumstances before during and after the December polls.

Meanwhile, all the women who showed up in their numbers were offered medical screening during the event and the medical team described it as highly successful.