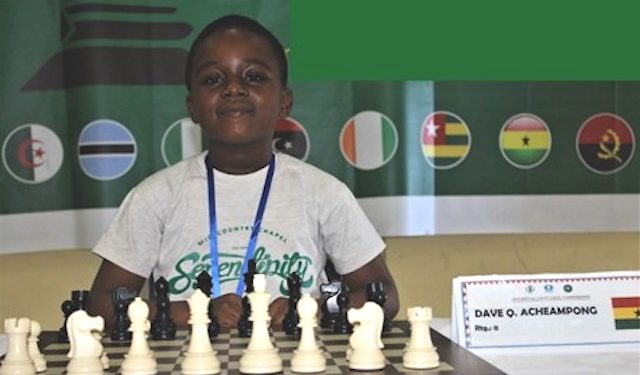 Eight-year-old Dave Chief Quansah Acheampong of the Jack and Jill School in Accra has won the Africa Under-9 Chess Champion Competition in the just ended African Schools Individual Chess Championship 2020.

This is the first time a Ghanaian chess player has won such a contest.

For his prize, Dave gets a roundtrip economy class air ticket by the African Chess Confederation to represent Africa in the World Schools Individual Chess Championships to be held in Halkidiki, Greece between May 2-11, 2021.

This year’s African Chess Confederation contest was hosted online as a result of the COVID-19 pandemic.

The five-day tournament saw 105 players from countries in the continent including Kenya, Uganda, Botswana, South Africa, Egypt, Angola, Algeria, Zimbabwe, Malawi and Morocco competing in different age categories: Under 9 years, Under 11 years, Under 13, Under 15 and Under 17years.

Dave, who is currently Ghana’s under 8 champion, started the tournament with a win in the 1st round and suffered 3 losses in subsequent rounds.

Despite, his loses, Dave came back to win every game in the remaining 5 rounds of the tournament.

Finishing with 6 points out of 9 to grasp first place prize ahead of top favorites: Mohammed Hossam Adham from Egypt and Rannveer Tak from South Africa.

It came as a surprise to many in the Ghana Chess Association although Dave is believed to be a promising and talented young player.

Speaking to his father after the award ceremony, Mr. David Acheampong, he explained that Dave was introduced to Chess at age four and has since shown love for the game.

Mr. Acheampong described his son as an asset for the country, noting Dave has won some local competitions and that the Africa Under-9 Chess Championship was the biggest prize won so far.

Mr. Acheampong, who is also the founder of Mentors Chess Academy, expressed the hope that his son’s achievement would inspire more children to take interest in learning chess as it helps enhance problem-solving and analytical skills.

“The boy wants to be a chess grandmaster in the near future. It has become imperative for the young prodigy to maintain his consistency in his chess hobby and therefore, will need all the support going forward,” he said.