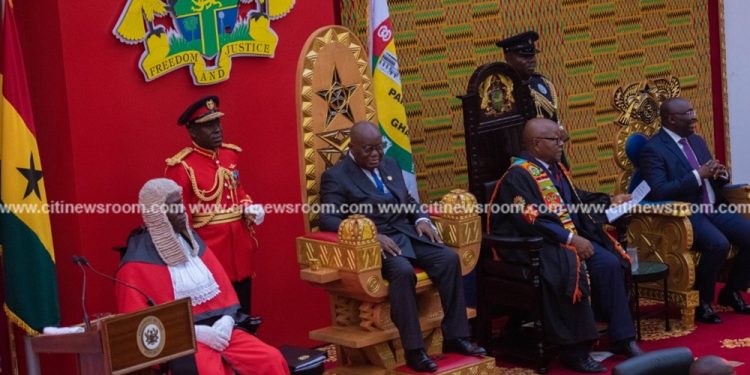 President Nana Addo Dankwa Akufo-Addo will on Tuesday, January 5, 2021, deliver the last State of the Nation Address of his first term in office.

This is in accordance with Article 67 of the 1992 constitution which states that “the President shall, at the beginning of each session of Parliament and before a dissolution of Parliament, deliver to Parliament a message on the state of the nation”.

The presentation is also ahead of the President’s inauguration and swearing-in for his next four-year administration as well as the dissolution of the current seventh Parliament.

Parliament in a statement from its Public Affairs Directorate said, the event is scheduled for 10:00 am.

It will, however, be strictly by invitation due to COVID-19.

In his February 21, 2020 State of the Nation Address, President Akufo-Addo touched on various aspects of national development including health, security, economy, agriculture, environment and corruption.

Expectations are that the President will this time around be heavy on his second term, the ravaging impact of the COVID-19 and other sectors of the economy and social development.

Meanwhile, the House has announced its programmes leading to the dissolution of its seventh session to pave way for the inauguration of the eighth session on Thursday, January 7, 2021.

The line up of activities also covers the inauguration and swearing-in of President-elect, Nana Addo Dankwa Akufo-Addo on the same day.

Following the expiration of the seventh Parliament of the Fourth Republic, elected Members of Parliament of the eighth session will convene in the Chamber to elect a Speaker and his deputies at 12:01 am on Thursday, January  7 after which they will be sworn-in.

President Akufo-Addo will then be sworn-in as well on the same day in the House.