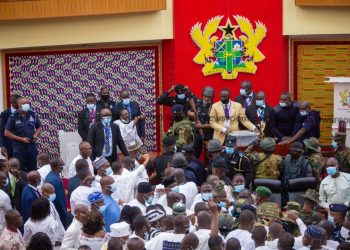 The Member of Parliament (MP) for Asante Akim Central, Kwame Anyinadu Antwi has apologised to Ghanaians on behalf of his colleagues for the chaos that was seen in the chamber on January 7, 2021, ahead of the election of Speaker of the 8th Parliament.

Mr. Anyinadu Antwi in a Citi News interview described the incident as embarrassing and apologised to Ghanaians.

“Though I have no official position, I would like to apologise to Ghanaians for what happened on Thursday. It is totally embarrassing. And it will not happen again.”

He however blamed the Clerk of Parliament, Cyril Kwabena Oteng Nsiah for the scuffle that ensued in the chamber on inauguration day.

He noted that the Clerk was not able to call the MPs elect to order due to the respect he had for them.

“I believe the Clerk is to be blamed for how things turned out in the house. He was unable to control the house, for which reason things got out of hand. Had he brought the issues under control, things would not have escalated as they did. But I believe he did what he did out of the respect he has for the house.”

Several unexpected incidents led to chaotic scenes in Parliament during the inauguration of the 8th Parliament.

Parliament was thrown into a state of confusion when the National Democratic Congress (NDC) Caucus rejected a decision by the Clerk of Parliament to prevent the MP-elect for Assin North, James Gyakye Quayson from taking part in processes for the selection of a Speaker for the House.

Other incidents were; the confrontation between the two caucuses over sitting position, the NDC MPs’ challenge of the manner in which the secret voting process for the Speaker of Parliament election was being done, the invasion of the parliamentary chamber by armed soldiers as well as the snatching of ballot papers by Mr. Ahenkorah.

Many have since called for a thorough parliamentary probe of incidents that occurred on the night.