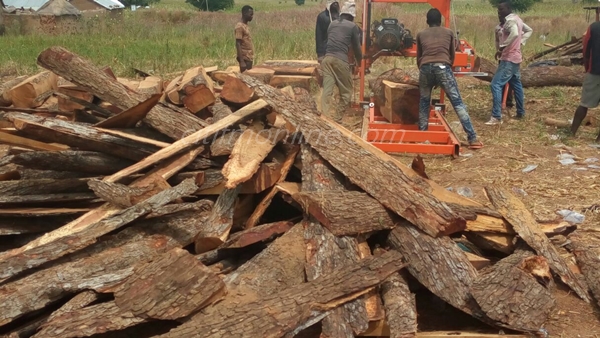 The Ministry of Lands and Natural Resources has once again, stressed on the enforcement of the ban on rosewood felling and exportation in Ghana.

“The ban on the harvesting, transporting and export of Rosewood still remains in full force and any person or group of persons who flout this ban will be arrested and prosecuted according to the laws of Ghana,’ a statement from the Ministry said.

This warning comes after “some unscrupulous persons took advantage of the Christmas festivities to engage in the illegal harvesting and haulage of Rosewood”.

“This has culminated into several truckloads of Rosewood and other wood products that have been intercepted and currently parked at the Achimota Depot of the Forestry Commission waiting for punitive measures to be taken,” the statement added.

The ban on rosewood harvesting in Ghana was first put in place in 2014 when former President John Mahama was in power.

The Ministry cited the “abuse of permits granted some loggers to harvest rosewood in the catchment area of the Bui dam” as the reason for the imposition of the ban.

It was since lifted in 2017, with the Minister in charge at that time, John Peter Amewu, giving over 20 companies permission to fell the trees.

But in March 2019, the trade was banned again, following the alleged corruption and illegal trade of the wood and has since been in force till date.

Although directives on the ban has not changed, some recalcitrants have over the years, been caught engaging in the felling and haulage of rosewood, hence the need for the Lands and Natural Resources Ministry to reiterate the directive.

The Ministry, according to the statement, has pledged that it will not grant any request by stakeholders to lift the ban.

“Lifting of the ban is not envisaged anytime soon in view of the uncontrolled destruction of the fragile ecosystem from where Rosewood is largely sourced.”

The Forestry Commission, on their part to tackle the menace, has also intensified its monitoring and patrol activities in hotspot areas “and they will impound any truck(s) conveying Rosewood and other wood products which have been illegally harvested.”

No school will be left out in distribution of PPE – GES

No school will be left out in distribution of PPE - GES