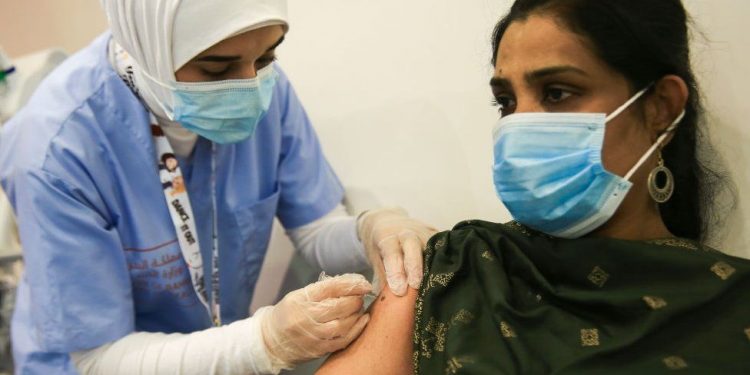 Chinese authorities have given conditional approval for public use of a coronavirus vaccine developed by state-owned drugmaker Sinopharm.

The move came a day after the firm said interim data showed its leading vaccine had a 79% efficacy rate in phase three trials, without providing more details.

Several Chinese-made vaccines at a late trial stage are already in use in China after being granted emergency licences.

The pandemic emerged in the central Chinese city of Wuhan in December 2019.

It has since spread around the world, but China has managed to bring infection rates down to very low levels through strict anti-virus measures.

The search for the source of the coronavirus has led to tensions with the West. The US – among a number of other countries – raised questions about whether China was fully transparent when the virus first emerged there.

What has China said about the vaccine?

Thursday’s announcement concerning the vaccine made by the China National Pharmaceutical Group, or Sinopharm, is China’s first general approval of a homemade jab – and it is being seen as potentially a major step towards inoculating the world’s largest population.

The deputy commissioner of China’s National Medical Products Administration, Chen Shifei, announced the decision at a news conference in Beijing.

“After a series of strict reviews, verification, test and data analysis in accordance with the law and procedures, it is concluded that the known and potential benefits of Sinopharm’s new inactivated coronavirus vaccine are bigger than the known and potential risks, and it fully meets the pre-set requirements of conditional marketing standards,” he said.

Vice Minister of the National Health Commission Zeng Yixin said approval would allow the government to “extend vaccination to high-risk groups, those susceptible to a severe viral infection… and the elderly”.

In July, China approved three different jabs for emergency use in key workers and other people at high risk. More than 4.5 million doses have so far been administered.

Beijing hopes to inoculate tens of millions more people by mid-February, the start of the Chinese New Year.

Sinopharm is also working on a second vaccine, and a number of other Chinese vaccines are in production. These include CoronaVac, made by the Beijing-based biopharmaceutical company Sinovac.

What do experts say?

Some experts have given a cautious welcome to the approval of the Sinopharm vaccine in China, but they also point out that no detailed data from trials have been publicly released.

“The lack of fully reviewed papers or data published by official institutions makes it difficult to comment on the efficacy of the Chinese or Russian vaccines,” Song Man-ki from the International Vaccine Institute in Seoul, told Reuters news agency.

“We can’t simply evaluate a vaccine based on a drugmaker’s statement… More data will be compiled once some countries begin vaccinations.”

Prof Paul Griffin, an expert in infectious diseases at the University of Queensland, said: “A conditional approval like this is obviously very much contingent on the ongoing clinical trial results as well as the close-up observation of the people who were receiving the vaccine.

It is thought that 60-70% of the global population must be immune to stop the virus spreading easily.

Rival vaccines made in the West by Pfizer-BioNTech and Moderna have been approved for public use after trials showed they had 95% and 94% efficacy rates respectively.

A vaccine developed by Oxford University-AstraZeneca was approved in the UK on 30 December following trials showing that it stopped 70% of people developing COVID-19 symptoms.

Who will use China’s vaccines?

China has vowed to share its vaccines with other, less-developed countries at a “fair price” so they are likely to end up being used by huge numbers of people around the world.

Earlier this month, the United Arab Emirates became the first other country to roll the Sinopharm vaccine out to the public, saying it was 86% effective in a phase-three trials. Bahrain then followed suit, allowing adults to register online to receive the jab for free.

On Thursday, within hours of the Sinopharm vaccine being approved in China, Pakistan announced a 1.2 million dose purchase deal with the company.

Singapore has also signed advance purchase agreements with vaccine makers including Sinovac, as well as Moderna and Pfizer-BioNTech.

Shipments of Sinovac have arrived in Indonesia and Sinovac is also known to have secured other deals with Turkey, Brazil and Chile.

Analysts point to China’s bid to win the vaccine diplomacy race, which has also reportedly seen China’s President Xi Jinping pledge to set aside $2bn (£1.5bn) for the African continent, while also offering Latin American and Caribbean countries a $1bn loan to buy vaccines. It’s unclear what the terms of such a deal might be.

What other vaccines are being developed?

Other trial results are also expected in the coming weeks.

Data on the Russian Sputnik V vaccine, which works like the Oxford one, suggests it is 92% efficient.

Janssen’s trial is recruiting 6,000 people across the UK, in a total of 30,000 volunteers worldwide, to see if two jabs give stronger and longer-lasting immunity than one.

Wuhan Institute of Biological Products in China, and Russia’s Gamaleya Research Institute are all in final testing