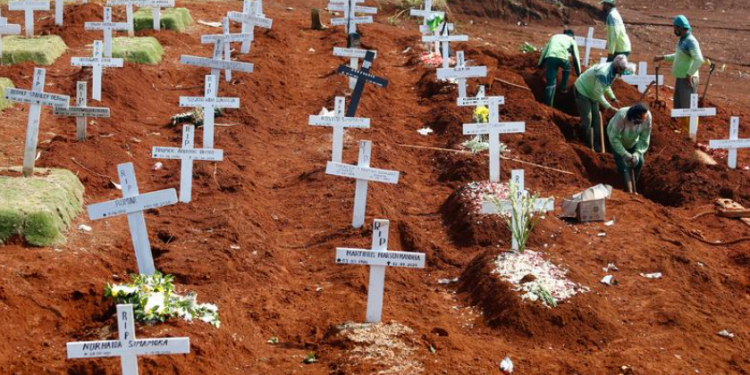 Prime Minister Boris Johnson said he took “full responsibility” for the government’s actions, saying: “We truly did everything we could.”

“I’m deeply sorry for every life lost,” he said.

A total of 100,162 deaths have been recorded in the UK, the first European nation to pass the landmark.

The UK is the fifth country to pass 100,000 deaths, coming after the US, Brazil, India and Mexico.

It follows a surge in cases last month, leaving the UK with one of the highest coronavirus death rates globally.

The number of cases in the UK has been falling in recent days, but the number of people in hospital remains high, as do the UK’s daily death figures.

Earlier, figures from the ONS, which are based on death certificates, showed there had been nearly 104,000 deaths since the pandemic began.

The government’s daily figures rely on positive tests and are slightly lower.

A further 20,089 coronavirus cases have also been recorded.

Mr Johnson told Tuesday’s Downing Street press conference that it was “hard to compute the sorrow contained in this grim statistic”.

“I am deeply sorry for every life that has been lost and of course as prime minister I take full responsibility for everything that the government has done,” he said.

He said he offered his “deepest condolences to everyone who’s lost a loved one”, saying: “Fathers and mothers, brothers and sisters, sons and daughters, and the many grandparents who’ve been taken.”

Mr Johnson continued that “we will come together as a nation to remember everyone we lost and to honour the selfless heroism of all those on the front line who gave their lives to save others” once the country is through the pandemic.

But he said “at a certain stage we will want to be getting things open”.

“What I will be doing in the course of the next few days and weeks is setting out in more detail, as soon as we can, when and how we want to get things open again.” 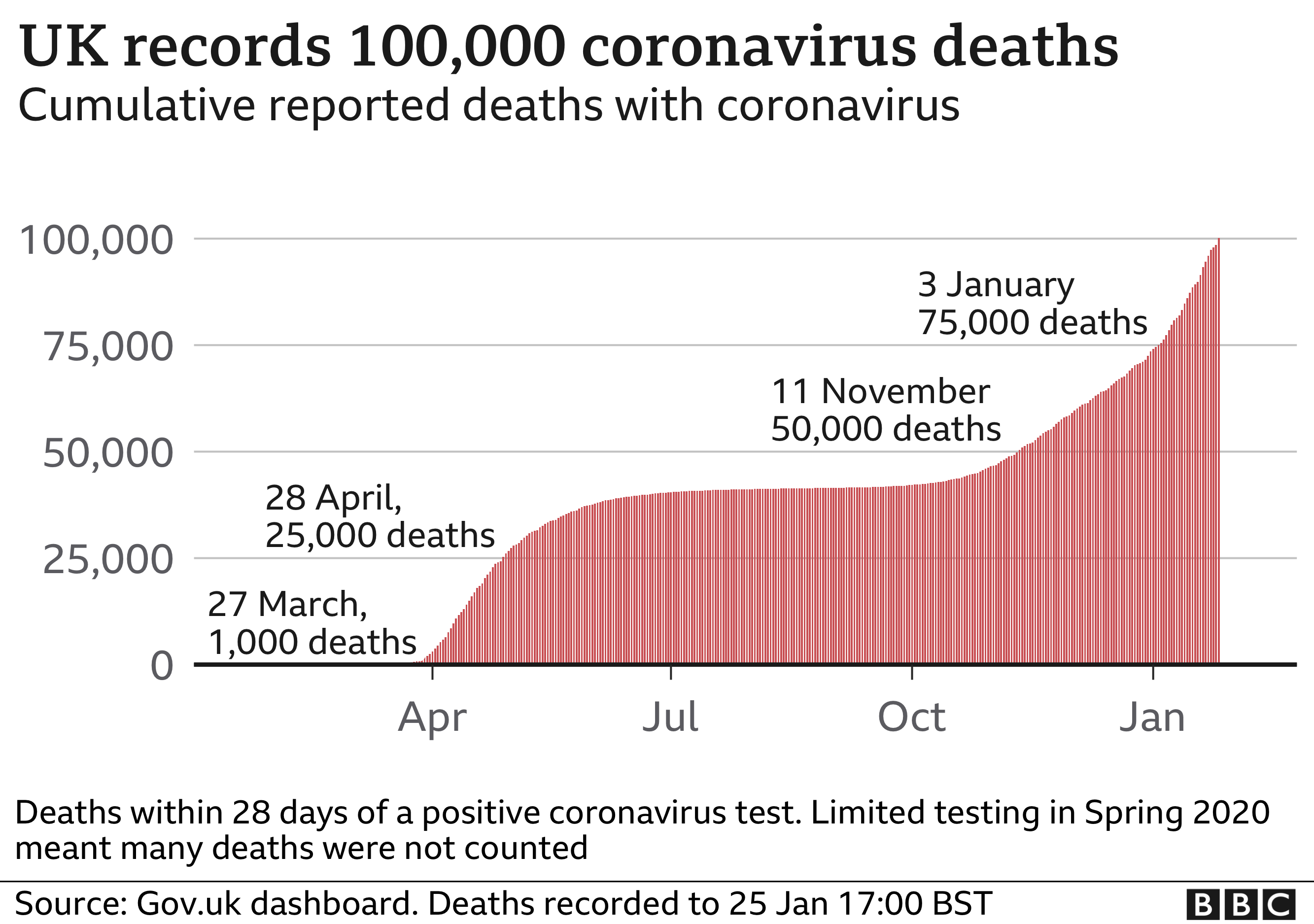 “It looks as if it’s coming down very slightly in some areas, including London, and the South East and East of England, but there are some areas of the country where it is still not convincingly reducing,” he said.

He said the number of people dying “will come down relatively slowly over the next two weeks – and will probably remain flat for a while now”.

“We will still unfortunately be having additional deaths to add to that very sad total that the prime minister talked about,” Prof Whitty added.

He said he expected more treatments within the next six to 18 months, adding: “We can see a world in which coronavirus may be more treatable, but for now, it’s a combination of reducing infections and getting vaccinations done.”

Dr Yvonne Doyle, medical director at Public Health England, said it was a “sobering moment in the pandemic”.

“These are not just numbers,” she said. “Each death is a person who was someone’s family member and friend.

“This virus has sadly taken millions of lives across the world, but we have learnt a lot about this coronavirus over the past year. The best way to slow the spread is to follow the rules and right now that means staying at home.” 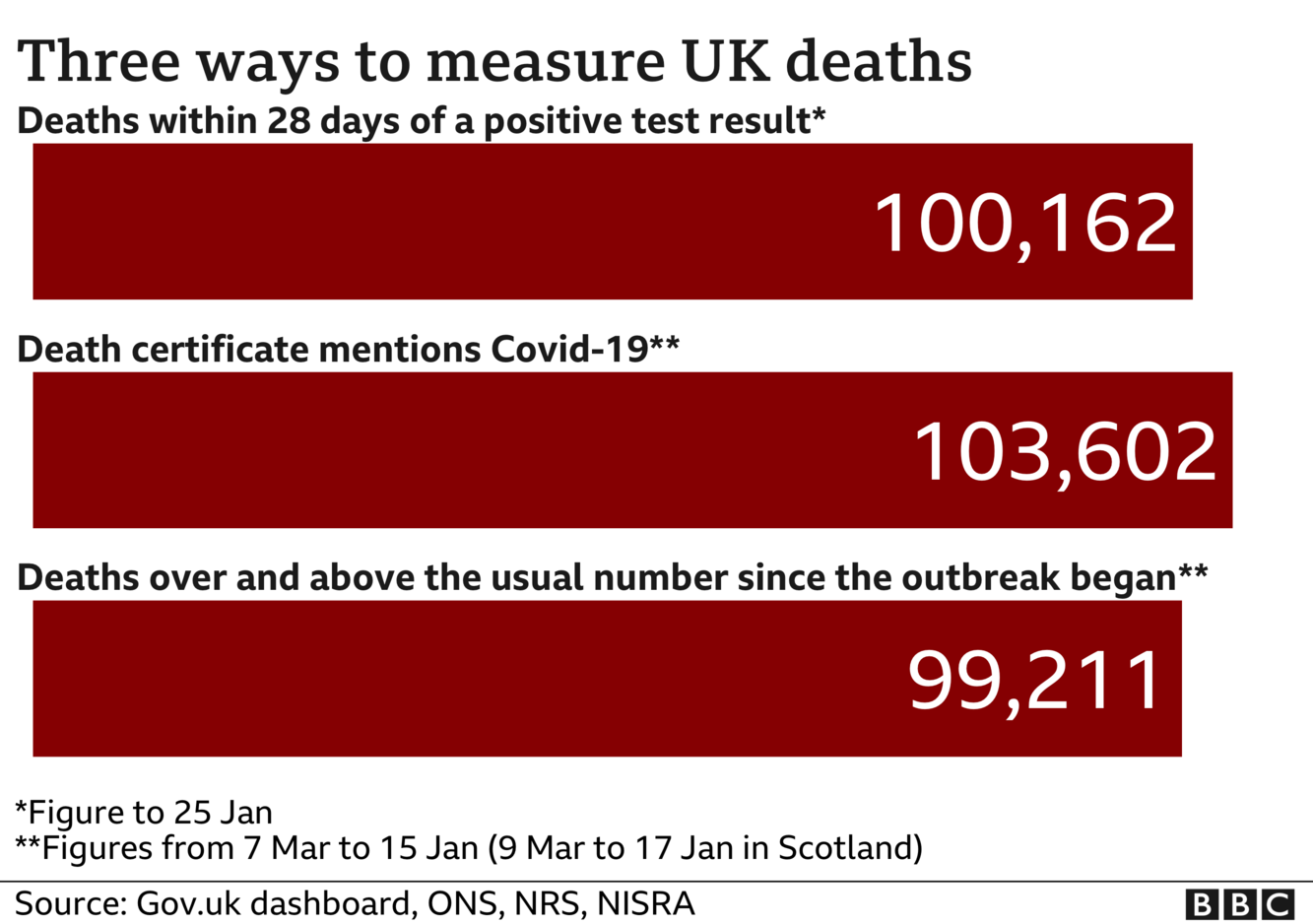 Health Secretary Matt Hancock said it was “heartbreaking” that the UK’s coronavirus death toll had passed 100,000.

“My thoughts are with each and every person who has lost a loved one – behind these heartbreaking figures are friends, families and neighbours,” he said.

“The vaccine offers the way out, but we cannot let up now and we sadly still face a tough period ahead.”

More than 6.8m people in the UK have had their first dose of a coronavirus vaccine, according to the latest figures.

Labour leader Keir Starmer said it was a “national tragedy” to have reached 100,000 deaths.

“We must never become numb to these numbers or treat them as just statistics. Every death is a loved one, a friend, a neighbour, a partner or a colleague,” he said.

The government “has been behind the curve at every stage” of the pandemic and had not learnt lessons over the summer, he added.