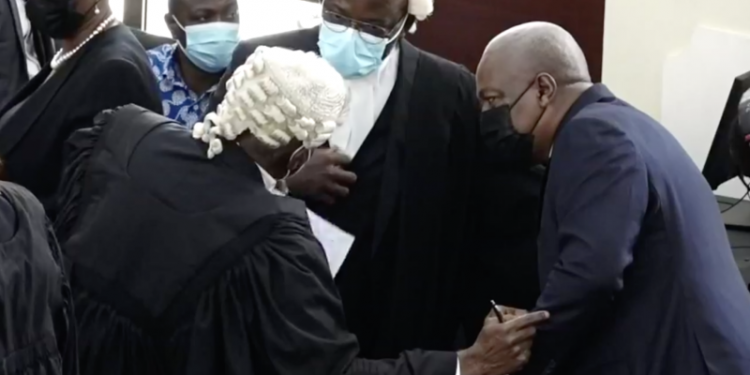 Supreme Court justices hearing John Mahama’s election petition have not taken kindly to his lawyers’ decision not to file witness statements that were due last week.

Mr. Mahama’s lead counsel, Tsatsu Tsikata was not in court at the time the hearing started thus his co-counsel, Tony Lithur, bore the brunt of the justices’ queries.

Mr. Lithur explained that he had not filed the statements because of Mr. Mahama’s stay of proceedings application filed to allow for the possible review of the ruling on his attempt to serve interrogatories on the Electoral Commission (EC).

“Filing processes while the application for stay of proceedings is pending will amount to taking a first step which may be used against us in determining the application,” the lawyer argued.

The justices, who were expecting the witness statements on January 21, have since received multiple applications concerning the case from Mr. Mahama’s camp, most recently a supplementary application for review of the court’s decision on his interrogatories.

They thus questioned why the statements could not have been filed in the same manner.

“You pick and choose which process you can file and which you cannot file,” one of the Justices said.

“Why are you refusing to obey the orders of the court meanwhile you want us to hear your applications.”

Mr. Lithur further defended the refusal to file the witness statement saying the review of the ruling on his attempt to serve interrogatories on the EC “would impact on the kind of witness statements we would file.”

He then got one judge upset by questioning if the review was “already predetermined” before subsequently apologising.

Before going on recess, the Justices concluded by reminding Mr. Lithur that “rules allowed him to file a supplementary witness statement.”

After they returned from the recess, the justices gave Mr. Mahama and his legal team up to Wednesday to file the statements in question.