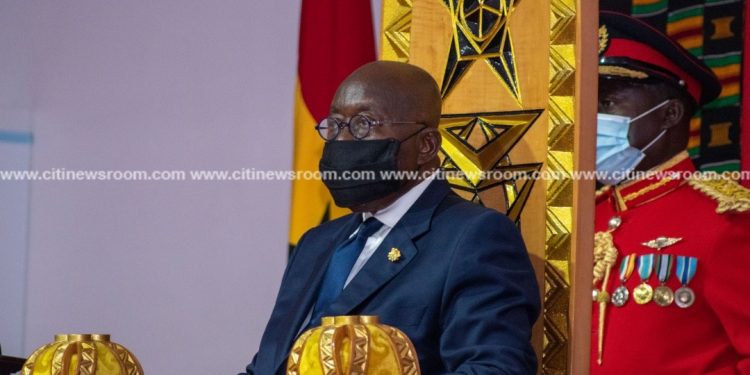 President Nana Akufo-Addo says the government’s programme for the revival of Ghanaian agriculture, “Planting for Food and Jobs”, has achieved considerable successes.

Delivering his final State of the Nation Address in his first term before Parliament today, January 5, 2021, President Akufo-Addo said the policy, has saved the nation from food shortage especially with the emergence of COVID-19, which caused a strain on various economies around the globe.

“During this COVID-19 crisis, we have, mercifully, been spared the spectre of food shortages. On the contrary, thanks to Planting for Food and Jobs, food has been in abundance in our markets across the country.”

He noted that the country has become self-reliant in food production.

“We have seen the dramatic turnaround of our agricultural fortunes, due to the progressive policies that have improved the living standards of farmers in the country. The excellently executed policy for Planting for Food and Jobs has laid the foundation for the agricultural transformation of our country. We are able to say that our country is now a net exporter of food, and we no longer have to import basic foods like plantain and tomatoes.”

The Planting for Food and Jobs policy, which has been in existence for about three years, is to boost local production and reduce the importation of foodstuff.

The ultimate aim is also to help reduce the impact of imports on the cedi’s performance as it will reduce the high requirement for dollars for such purposes.

Under the Planting for Food and Jobs, every district or local authority is expected to select a crop that it has a comparative advantage in, where the government will support the cultivation of such crops with fertilizer, improved seeds as well as other improved technology.

Even though crops such as Maize, Rice, Soybeans, Sorghum, and Vegetables including tomato, onion, and chili pepper are all cultivated under the policy, the cultivation of maize has been relatively dominant across the country.

As a result, in 2017, there was no importation of the grain as local producers recorded higher output, and have since been exporting some to neighbouring countries, according to the government.