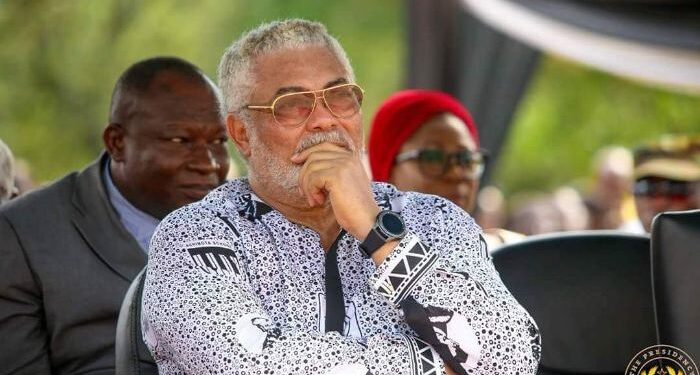 Rawlings is laid to rest. As I watched the ceremony, a number of things came to mind.

Why did we not display our culture – libation, traditional regalia, drums and the like.

Why did we not showcase our ‘royal’ to the world?

My mind went back to the wedding of Prince Harry and Meghan Markle in 2018; how royal that was;

I thought about how it gave the media in Ghana and social media users, a lot of ‘new information’; how much attention was paid to detail.

My mind also went back to the just ended Akwasidae and the beautiful pictures I saw on Yaw Pare’s feed, taken at the ‘royal’ event.

I cast my mind back to the scenes of Nelson Mandela’s funeral in South Africa. I felt sad.

I felt sad that an opportunity to showcase our various traditions and culture was allowed to slip away.

I felt sad that an opportunity to show the world that African culture, for that matter , Ghanaian culture, is not heathen. It is simply culture.

Why did we not display our rich culture from carefully selected traditions that make up our country?
The low moment for me was when the traditional drummers were threatened and asked to stop playing because they were at ‘church’.

Why could he or rather, we not show our love and resolve to uphold our culture and values by being more accommodating to the few who were trying to display it by way of music, although the timing was wrong?

Did we have to do the same copy-style burial service for the man of his stature?

Now that it is over, I can only daydream of a ‘royal funeral’ that would have given international media, wonderful pictures and videos of various parts of our culture and even generate some revenue by way of tourism to our struggling nation.

I can only wish that there was some recital of rich Akpalu dirge, Ab)fodwom , Paasaali dirge or Sisala dirge in addition to the Christian tradition to showcase the rich culture which Flt. J.J Rawlings is known to uphold, to usher the fallen president’s kla(kra) to the land of the dead.

May He rest in peace and may we not miss the few opportunities that come our way as a people, to showcase the symbols associated with our rich indigenous culture.
Regardless, it was a well-organised event with beautiful tributes.