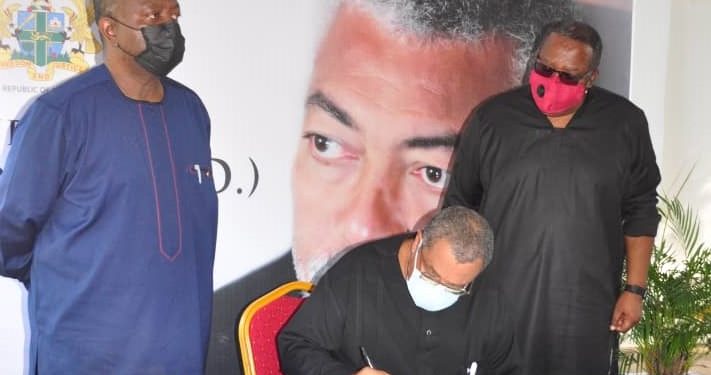 One of the leading members of the National Democratic Congress (NDC), Goosie Tanoh has joined many of the party stalwarts in paying unending tributes to its founder, the late Jerry John Rawlings.

Mr. Tanoh believes although the former President Rawlings had his own shortfalls during his era, he deserves commendation contrary to what some individuals refer to as his Provisional National Defence Council  (PNDC) intemperance.

In a written eulogy posted on social media, Goosie Tanoh mentioned that “it will never be forgotten that in an extremely dangerous period in our countries history when the fire of society’s anger blazed uncontrollably, you kept Ghana intact”.

He acknowledged that it was under J. J Rawlings that Ghana was able to enjoy unprecedented constitutional peace and stability and earned Ghana respect across the continent.

“God knows that you proved a successful nation-builder – second only in our history to Osagyefo. We all live today in the state that you established – the 4th Republic. This state has enjoyed unprecedented constitutional peace and stability and earned Ghana respect across the continent. And it is important to recognize how many of the elements of the 4th Republican constitutional formula were direct social democratic initiatives developed and piloted through PNDC practice.”

He extolled the first President of the Fourth Republic saying “you were a larger-than-life personality. You were a man of intense passion, courage, conviction, and fortitude with an incredible capacity to communicate your emotions and perspectives and to inspire action in individuals, institutions, and nations”.

Goosie Tanoh who worked closely with Rawlings described the demise of his former boss as a “tremendous loss” and extended his commiserations to the widow and four children that have been left behind. 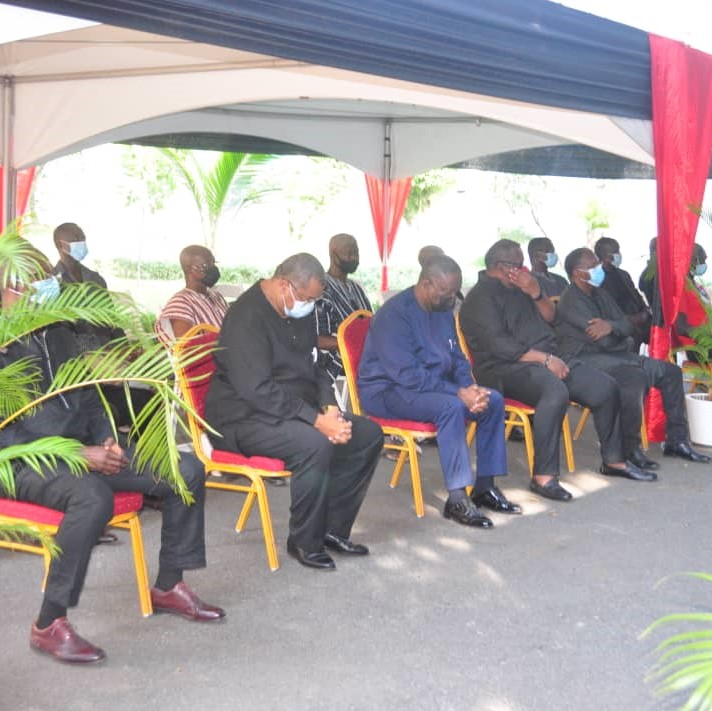 Read below the full tribute paid by Goosie Tanoh

Farewell Jerry. My comrade. My friend.

You were a larger-than-life personality. You were a man of intense passion, courage, conviction, and fortitude with an incredible capacity to communicate your emotions and perspectives and to inspire action in individuals, institutions, and nations.

I recognise your strong personal code – a mixture of “old time” traditional, Catholic, and military values. I know that at the centre of this was a deep sense of solidarity with the downtrodden and of outrage against the “down-pressors” of the world. You believed in the dignity of labour and in simple living and in leadership by example. You loved Ghana deeply – her peoples, her cultures, and her physical beauty. You may not have expressed your views in classical/ideological “anti-imperialist” or “pan-Africanist” terms, but there was never any doubt about your love for all of Africa. Indeed, you burned with indignation at the legacies of slavery and colonialism and the resultant disrespect that black people suffer everywhere. And you were willing to take direct and often undiplomatic actions to fight back against this prejudice.

Your code offered you a clear vision of Ghana’s potential. You devoted, and indeed repeatedly risked, your life to realise this potential. You struggled all your life with varying degrees of success with the ethical, institutional, and political conditions for social progress and justice. You sought practical ways to concretize this vision.

It was ultimately your passion for the downtrodden and your implacable hatred of injustice and oppression that transported you away from the life of a soldier’s soldier – and from the military life that you cherished so deeply. In the aftermath of May 15, 1979, your moral clarity, direct simplicity, and your loyalty to your men made you, overnight, a national political leader and set you on the surprising path to international statesman-ship as an African hero.

Did you have faults? Every man does and the greater the stage that one plays on the larger the “evil” may appear – especially as it is human nature to take the “good” for granted and inter it “with the bones” as Shakespeare reminds us. You, like all of us, were a product of your times. You burst along upon the national scene at a time of national strife, institutional collapse, and random military and police brutality against civilians. You inherited a trigger-happy and undisciplined military. You were inevitably a victim of other people claiming your authority to do unpleasant acts. You also had to take tough and often unpopular decisions to stabilize the society and inch back from the precipice of national disintegration and despair that so many other sister countries plunged over in the 1980s and 1990s. Were your calculations always right and was the cost always acceptable? Of course not. But we do know and can attest to a genuine desire to obtain the most beneficial and lasting solutions to the huge number of problems we faced as a nation and as a continent. Indeed, your intensity and straight-talking often made those around you uncomfortable.

You were not immune to the contradictions, reversals, and inconsistencies of balancing so many interests to create a path forward for Ghana and the continent. But it will never be forgotten that in an extremely dangerous period in our countries history when the fire of society’s anger blazed uncontrollably you kept Ghana intact. You kept Ghana whole. We who were witnesses can only guess the scars, anguish and pain you may have suffered with the tragedy and loss of so many. I salute your sacrifice.

God knows that you proved a successful nation-builder – second only in our history to Osagyefo. We all live today in the state that you established – the 4th Republic. This state has enjoyed unprecedented constitutional peace and stability and earned Ghana respect across the continent. And it is important to recognize how many of the elements of the 4th Republican constitutional formula were direct social democratic initiatives developed and piloted through PNDC practice. A few examples will suffice.

A lasting constitutional Republic would never have been possible without the depoliticization of the uniformed services and the restoration of professionalism and discipline that was broken by the 1966 coup and its several successor coups. Our Armed Forces and Police are today widely respected and sought after in peacekeeping operations in flash points across the globe. This was the work of the PNDC and especially Jerry Rawlings.

People forget that it is the PNDC in its quest for a participatory democracy that established the local government “Assemblies” system that the country has used for the last 30 years and whose non-partisan character helped to stabilise our political system under the 4th Republic.

We easily forget that it is the PNDC under Jerry that committed Ghana to both immediate Free Compulsory Universal Basic Education and to progressively free education for all Ghanaians at all levels of education – policies that are now entrenched in the Constitution and which Parties of the Left and Right compete to demonstrate their commitment to. And it was you JJ Rawlings who established the University of Development Studies (including providing private resources for it) the first public university established since the Nkrumah period and, critically the first university in Northern Ghana.

Jerry Rawlings’ PNDC took critical and concrete steps to advance the status and rights of women in our society. “At least one of whom shall be a woman” the formula that runs through all our institutional governance legislation came from these efforts. It was the PNDC that passed the current intestate succession laws that give widows stronger claims on the wealth that they have jointly created with their deceased husbands is another example.

Many forget that it was during your stewardship that Ghana launched the Pamscad to blunt the ravages of the Breton Woods Orthodoxy and give a human face and social con-tent to Structural Adjustment. Pamscad was the forerunner of today’s Poverty Alleviation Initiatives that have become part and parcel of international economic life.

Rawlings’ PNDC and his NDC government restructured our forestry, mining, petroleum, and power sectors attracting investment, building indigenous capacity and creating jobs. Rawlings was an environmental and climate activist even before concerns about global warming had become a major issue on the international agenda.

Time and space will not allow me to complete the list of the far-reaching achievements of your work that we enjoy today and take for granted.

Perhaps your greatest legacy, which cannot be computed in cedis or pesewas or be captured by economic indicators, is that the Ordinary Man and Woman in Ghana today has a VOICE.

You were a great man as many can attest to. You were also a warm, humorous, and generous human being… Your passing is a tremendous loss.

My heart goes out to Nana Konadu your soulmate and comrade through many difficult struggles. My thoughts are also with my god-daughter Zanetor, and with Yaa Asantewaa, Amina, and Kimathi. All I can say to you is: be proud, you are offshoots of a truly great man, one who has left huge strides and footprints in the sands of time. One who loved you and his country with an intensity that few can know.

Rest in peace, my brother you have done enough and what was asked of you.
Go well Sir. Go safe.