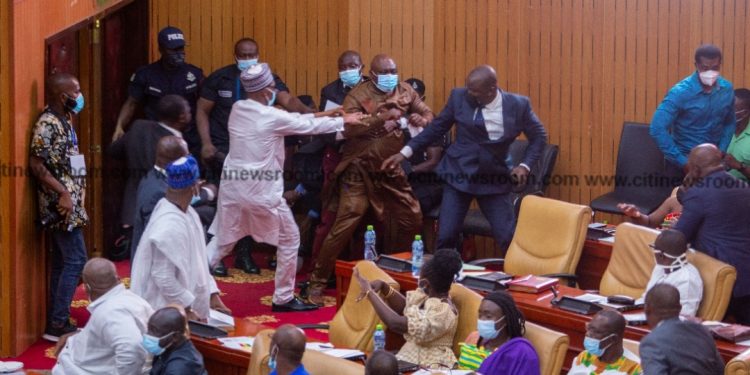 A group called the Concerned Youth of Tema West has called for stiffer punishment for the Member of Parliament (MP) for Tema West, Carlos Ahenkorah for attempting to mar the election of the Speaker of the 8th Parliament last Thursday, January 7, 2021.

On the said date, he snatched uncounted ballot papers and attempted to bolt with them after realizing his side had lost the speakership position.

But he was overpowered and accosted at the entrance of the parliamentary chamber and physically challenged by some NDC MPs.

Speaking on Eyewitness News, the convener of the group, Boutrous Andy said law enforcers will be doing Ghanaians a great disservice should the Tema West legislator go unpunished.

“This is not the first time he has engaged in such lawlessness and recklessness. During COVID-19, he endangered the lives of many, knowing fully well that he was infected. It resulted in the death of a party member. Because he went unpunished for his lawlessness, he has been emboldened to do more.”

“We will not tolerate this. We voted for him to represent us and not to engage in such atrocities.  Someone was arrested in Sene West for snatching a ballot box, what Carlos did is worse than that, yet that man was fined and banned, and also sentenced to jail.  It will be unfair if this man is not dealt with.”

Meanwhile, the Tema West MP has apologized for his inactions.

Mr. Ahenkorah in a press statement said he is heartbroken for the turnout of events on the day.

“I did it for the grassroots who relied on us in power to survive, the president who needs some peace to run the country, and the greater NPP party as a whole because we cannot always allow the NDC to threaten and vilify us. I apologize though to my family and friends both far and near who may be affected by my actions. The NPP in me couldn’t be controlled. I apologize but I tried!!!”